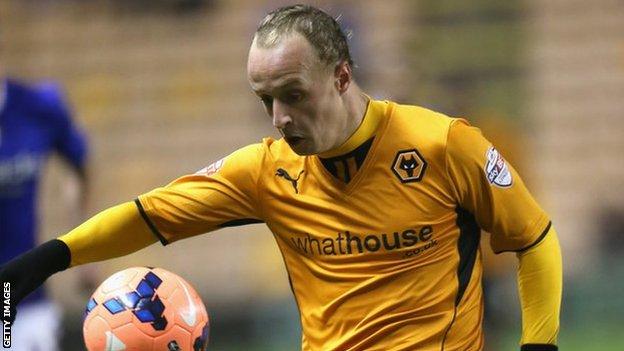 Celtic have made a fresh bid for one of their signing targets, but manager Neil Lennon says the player in question is not Wolves striker Leigh Griffiths.

"We did put a bid in today for a player," he told BBC Scotland after his side swept aside Kilmarnock 4-0.

"It's a different player and we're waiting on confirmation of that being accepted."

Lennon said nothing had changed on Griffiths' situation since a bid was rejected by Wolves earlier this week.

The 23-year-old Scotland striker had re-tweeted a social media link earlier in the day to his present club's news that they had agreed terms for Coventry City's Leon Clarke, who could be viewed as his replacement at Molineux.

Lennon would not be drawn on the player for whom Celtic had made a bid.

"It is still very, very delicate and we'll wait and see what tomorrow brings on that," he said.

"I am not saying the Griffiths deal is dead by any means, but we do have other people in mind, not for that particular position but also for other positions."

Lennon also said there was no further news about Georgios Samaras' future at Celtic Park.

The Greece striker has failed to agree a new contract beyond the summer, reportedly having attracted attention from other clubs and was an unused substitute against Kilmarnock.

"There's been no direct contact from any clubs regarding Georgios," said the manager.

"So, if the window shuts and he's still here, he's still very much part of the plans."

Lennon heaped praise on James Forrest, who had injury problems earlier in the season but set up Celtic's first two goals and was named man of the match against Kilmarnock.

"He's got fantastic pace and acceleration, low centre of gravity and his technique on the ball when he runs quickly means he has it under control, he can go both ways, he has an end product and he's healthy," said Lennon.

"He looks really fit and strong physically, so we're hoping we'll get a good half a season out of him and that'll make us so much better.

"It's no coincidence that we're scoring a lot of goals now he's back in the team."

"I thought the first half was outstanding - the best football we've played here this season," he added.

"I thought Forrest and my two central midfield players, Ledley and Brown, were magnificent and set the tone for what was an excellent all-round performance.

"We could have won by more, but we also had to rely on Fraser Forster for an exceptional save at 2-0.

"I got everything I asked from them and we are really in a good place at the minute.

"I keep reminding the players about the Champions League campaign and how far we still need to go to be recognised as a big team.

"But we are building again and if we can keep the likes of Forrest and Commons and those players fit then we have a good chance of going in the right direction."