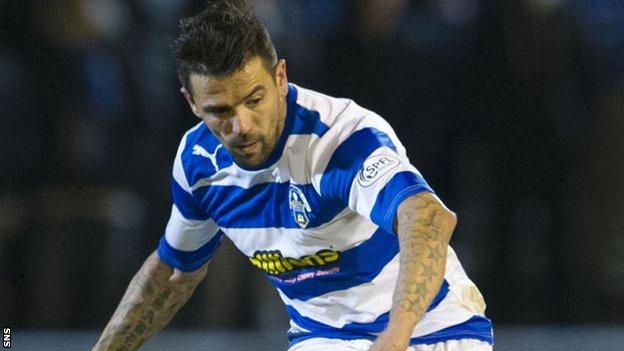 Danny Lennon has confirmed that former Rangers striker Nacho Novo is being given a trial but that St Mirren have other transfer targets.

Novo was recently on a short-term contract with Morton but was released by the Scottish Championship side.

"I had a chat with Nacho, so we've invited him in for a couple of days training," said the Buddies manager.

"We'll have a wee look and see what happens there, but there's other irons we have in the fire at this moment."

The 34-year-old Novo has also previously played for Raith Rovers and Dundee in Scotland and, since ending six years with Rangers in 2010, had spells at Sporting Gijon and Legia Warsaw before a return to Huesca in his native Spain.

It's been a busy month for us, we've worked very hard and hopefully over the next couple of days we'll have something to show for our efforts

He joined Morton in October but was not kept on when Kenny Shiels took over as manager.

St Mirren do not have to make a decision on the Spaniard before the transfer window closes as he is a free agent, but Lennon hopes to add to his squad before midnight on Friday.

"I can say to the St Mirren fans, it's been a busy month for us, we've worked very hard and hopefully over the next couple of days we'll have something to show for our efforts," he said after the 2-1 defeat by Hearts.

Lennon was left furious with referee Steven McLean's decision to give a penalty kick after defender Marc McAusland was adjudged to have bundled over Dale Carrick just after half-time.

With the score at 1-1 after Buddies striker Steven Thompson and Hearts' Callum Paterson found the net within the first five minutes, McAusland was ordered off for denying Carrick a goalscoring opportunity and Jamie Hamill converted from 12 yards to give the hosts all the points.

"I am angry man," Lennon told BBC Scotland. "It was a game that had everything in the first half - two early goals and it set the tone for a high-tempo game and both sets of players have to take credit.

"But I certainly seen it as a game there for the taking for us in the second half and, five minutes into that, a decision has gone against us.

"I've seen it from four or five different angles and it's inconclusive for me whether there's any contact and, if so, it's minimum. Inside the box? No."

However, Lennon praised his players' efforts.

"You are pleased that you are creating chances and playing that type of football," he added.

"Even with 10 men, I thought we looked dangerous.

"Our players showed terrific energy even with 10 men and still looking to take something from the game."