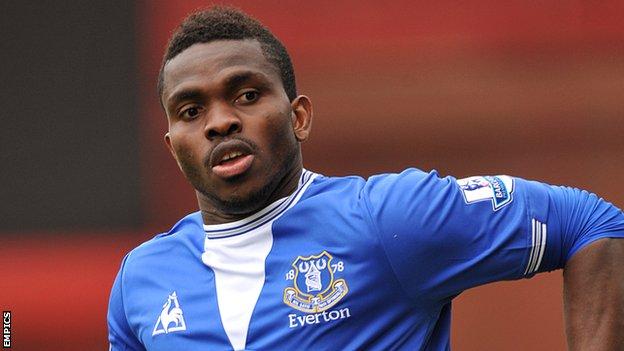 Nigeria defender Joseph Yobo has joined Norwich City on loan from Turkish club Fenerbahce until the end of the season.

The centre-back, who has won 95 caps for his country, left Everton in 2012 after a decade at the Premier League club.

"This is a league I understand and I hope to give my best to Norwich," Yobo, 33, told BBC Sport.

"There were several options but Norwich clearly made their intentions known from the beginning."

Yobo has fallen down the pecking order at Fenerbahce following the arrival of Bruno Alves and, most significantly, the introduction of foreign player restrictions by the Turkish Football Federation.

He has played only twice this season, including the in August.

"Fenerbahce understand how important it is for me to play regular football and I'm grateful they sanctioned this move," said Yobo, who rejected the chance to join Cardiff City last summer.

"It's a very important decision and I'm happy with the opportunity to return to England."

Yobo was David Moyes' first signing as Everton manager and became the first African player to captain the Toffees, in the 2007 Uefa Cup tie against Larissa at Goodison Park.

He helped them qualify for the Champions League in 2005 and played in the team that lost the 2009 FA Cup final to Chelsea.

A return to England will give Yobo a chance to push for a return to the Nigeria side at this summer's World Cup in Brazil.

Norwich have conceded 35 goals in 23 Premier League games this season.