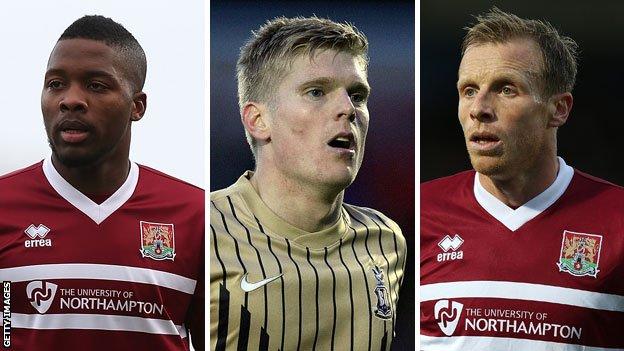 Defender McSweeney, who was and striker Connell, both 30, have signed until the summer.

Gills forward German, 22, will stay at Sixfields for a further month.

Former Hartlepool and Leyton Orient man McSweeney, who can also play in midfield, signed a short-term deal with Carlisle in September and played 10 times.

Connell has started just once for the Bantams this term, but scored 13 goals for Swindon in the 2011-12 campaign and was on target 25 times for Grimsby the season before.

"He's a good guy. He's an honest boy, a decent footballer and he scores goals. At this stage of the season, that's going to be vital."

Ravenhill made eight appearances for the Cobblers at the end of 2013 during a loan spell under previous boss Aidy Boothroyd.

"I know a lot about Ricky," said Wilder. "He's a winner, he's a competitive midfield player.

"A quick assessment of the team is that, in that area, we need not only good footballers but a voice in there."

Wilder is expected to make more signings before Friday's transfer deadline after Everton striker Hallam Hope returned to his parent club following the expiry of his loan.