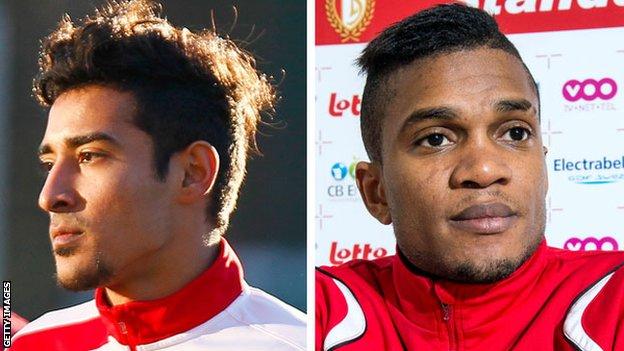 Iran forward Ghoochannejhad, 26, has agreed a deal until the summer of 2016.

Frenchman Nego, 23, has signed a three-and-a-half-year contract with the Championship club.

Both Belgian side Liege and Hungarian outfit Ujpest are owned by Roland Duchatelet, the businessman who took over the Addicks earlier this month.

He is hard-working and he likes to get in the areas to score goals, so we need him to do that straight away

The pair take the number of January signings by Charlton to five, with the previous three, midfielder Astrit Ajdarevic, goalkeeper Yohann Thuram-Ulien and winger Anil Koc, also coming from Belgian side Standard Liege.

Ghoochannejhad began his senior career in the Netherlands with Heerenveen and subsequently had spells with Go Ahead Eagles, Cambuur and Belgian side STVV - another side owned by Belgian millionaire Duchatelet.

He joined Standard Liege in January 2013 and has made eight appearances this season, with seven of those coming in the Europa League.

Having represented the Netherlands at youth international level, he made his debut for Iran in 2012 and has won a total of 10 caps, scoring eight goals.

Charlton boss Chris Powell said the arrival of Ghoochannejhad, who is expected to feature for his country at the World Cup in Brazil this summer, will boost his forward line.

"He has scored goals at different levels in Belgium and Holland," said Powell.

"We haven't scored enough goals this season and we have to boost that area. He is hard-working and he likes to get in the areas to score goals, so we need him to do that straight away.

"He has decent link-up play, but he wants to get in the box and in that regard you have to give him the service and create more chances."

Nego came through the youth system at French side Nantes and has represented France at youth level.

After impressing at the Under-20 World Cup in 2011, he joined Italian Serie A club Roma, but spent time on loan at Standard Liege last season before joining Ujpest, who play in Hungary's top tier, last summer.