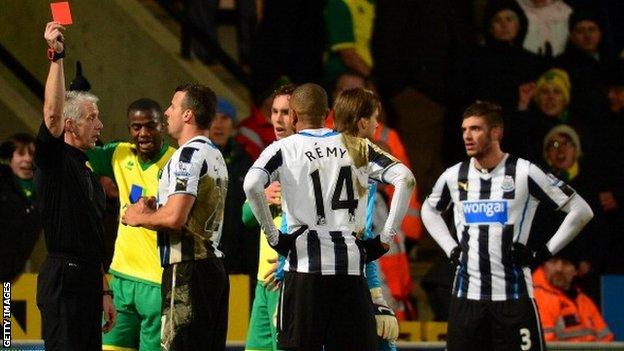 Loic Remy has been banned for three matches after the Football Association dismissed Newcastle United's appeal against his red card at Norwich City.

The striker was sent off in Tuesday's 0-0 draw after scuffling with Norwich midfielder Bradley Johnson, whose suspension was overturned on appeal.

Remy, 27, will miss matches against Sunderland, Chelsea and Tottenham.

Johnson, 26, is available for the Premier League trip to Cardiff on Saturday.

Frenchman Remy appeared to lower his head towards Johnson's after the pair clashed in the 82nd minute.

Referee Chris Foy showed red cards to both players, prompting appeals from each club which were heard by an FA commission on Thursday.

Remy, who has scored 11 goals this season, will miss Saturday's Tyne-Wear derby as well as Newcastle's trip to Stamford Bridge on 8 February and the visit of Tottenham four days later.