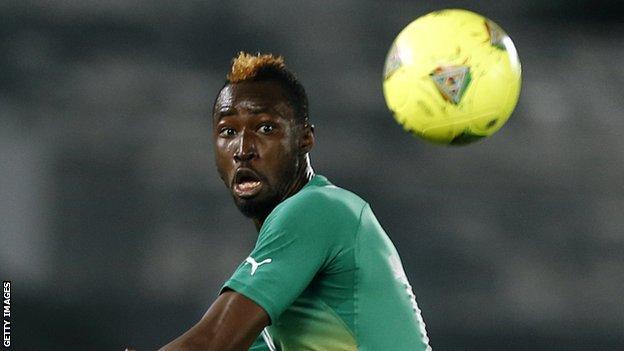 Ivory Coast striker Lacina Traore has revealed he chose to move on loan to Everton over West Ham because of the Toffees' passing style.

"I looked at the teams' styles of play and Everton are more of a passing side - their style suits my technical ability," said the 23-year-old.

"Everton are also quite well off for points in the league.

"I think with that sort of emphasis on skill and passing, I am hoping I can settle in as quickly as possible."

The Hammers had been in pole position to sign the 6ft 8in from French side Monaco after securing a work permit but Everton came in with a late bid to secure the forward for the rest of the season.

"There were other clubs interested in me at the beginning but I knew Everton had a good possibility of getting into European football next season," added Traore.

"I am pleased I have made this choice and I am standing by my choice of this club."

Everton boss Roberto Martinez believes Traore will add a new dimension to his team, but he will have to wait about two weeks for striker to regain fitness after a hamstring injury before he can select him.

"He is a very hungry footballer which, at this stage of the season, is very important," Martinez said.

"His size will give you the wrong impression of the way he is as a footballer. He is technically very gifted, he has a real understanding of the space and combination play around him and is really quick with his penetrating runs, he is a real athlete.

"All those aspects make us a little bit different because we haven't got that sort of player with that presence and height.

"He is a footballer who is going to bring us a lot."