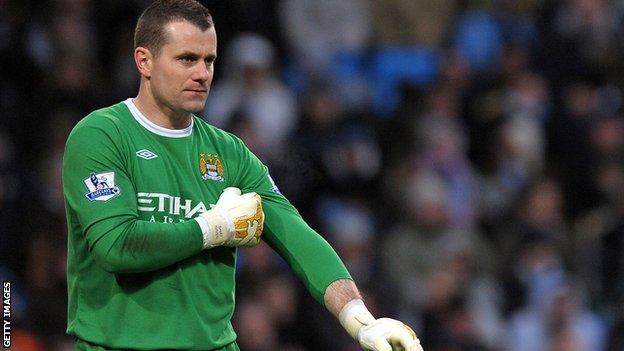 Former Manchester City goalkeeper Shay Given says the club can land a domestic treble this season, but will have to wait to win the Champions League.

City play Barcelona in the last 16 after making it through to the knockout stages for the first time.

"This team needs a few more years together and a couple more players," 37-year-old Given told BBC Sport.

"I think this year will be too soon for them to win it but the calibre of players mean they don't fear anyone."

Manuel Pellegrini's side have scored 115 goals in all competitions this season and were described as the "best team on the planet" by Tottenham boss Tim Sherwood after thrashing Spurs for the second time this season.

The results allowed them to move top of the Premier League table but they face a pivotal period as they look to secure an unprecedented quadruple of trophies.

No club has won the Premier League, Champions League, FA Cup and League Cup in one season.

As well as being the current league leaders, they face Chelsea in the fifth round of the FA Cup, Sunderland in the League Cup final, and four-time winners Barcelona in two home and away Champions League last-16 ties.

Former Newcastle stopper Given is confident the Blues can challenge on all fronts.

"The treble is on, I do fancy them for the three domestic trophies," said Given, who spent 12 years at St James' Park.

"The big question mark will be the Champions League and if they can win that but there is no reason why they can't.

"It was made clear I wouldn't be back in the team. I didn't even play in the Cup games. It was clear Mancini wanted me out of the club, for whatever reason, so I knew it was time to try and get a new club and move on.

I have no hard feeling towards Joe, we worked hard together for a few seasons and we worked well together. Joe has proven why he was picked, he is a fantastic goalkeeper and improving every season."

"Barcelona are not the same team they were three or four years ago when they were unplayable. It is a mouth-watering tie and an unbelievable game to be involved in."

Given was brought to the Etihad Stadium in February 2009 by Mark Hughes, making 69 appearances for the side, in which time he lost his place to current number one Joe Hart, before leaving for Aston Villa in July 2011.

Having won 125 international caps for the Republic of Ireland, Given praised Chilean manager Pellegrini's handling of Hart this season, after dropping the England international earlier in the campaign following a number of errors.

"Goalkeeping is a no-win situation," added Given, who is currently on loan at Middlesbrough. "It is a tough position, a lonely one as Joe will have witnessed this year and if you make a mistake there is no-one behind you to bail you out.

"Joe has come back and shown everyone he is a top-class goalkeeper.

"It was good man management from Pellegrini to give him a rest mentally from the spotlight of playing every week.

"He did a good job by taking him out for a month and just giving him a mental break, giving Joe time to gather his thoughts and to work on his game on the training ground."