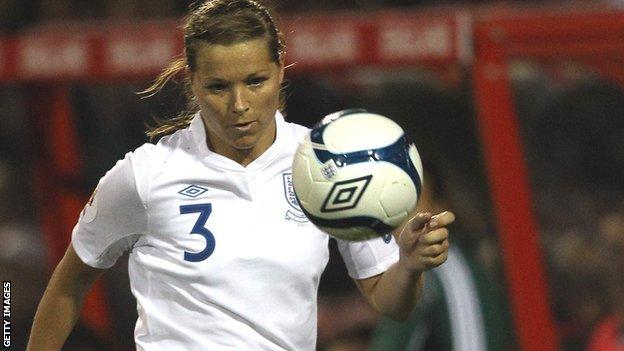 Unitt, 31, has 102 international caps and joins from Birmingham City Ladies, while 26-year-old Susi has 21 caps and moves from Chelsea Ladies.

Chief executive Luke Negus-Hill hailed the "fantastic" signings, adding: "They have great experience and all have been involved with England at some level."

Unitt is currently recovering from a knee injury, which saw her miss the 2013 Uefa Women's European Championships in Sweden.

Susi was in the Great Britain squad for the 2012 Olympics.

Manager Rick Passmoor said: "Rachel has played at the top level of women's football for many years and has constantly shown what she can achieve on the pitch. It's great to have Rachel here.

"Dunia's versatility as a footballer is a very valuable asset and being able to bring her to train full time means she is only going to improve."

And Holtham, who is from Nottingham and played under Passmoor when he was manager at Leeds Carnegie, has had call-ups to the England squad but has not represented her country.

Holtham said: "I'm here to compete with the best and finish in the top three of WSL [Women's Super League 1] and win a cup final, just like I did under Rick at Leeds."

All three players join a new-look squad which already has a number of England internationals including Sophie Bradley, Ellen White, Jess Clarke and Carly Telford.

Notts County were founded during the close season after the decision was taken to re-locate and re-name Lincoln Ladies, who were founder members of the FAWSL.