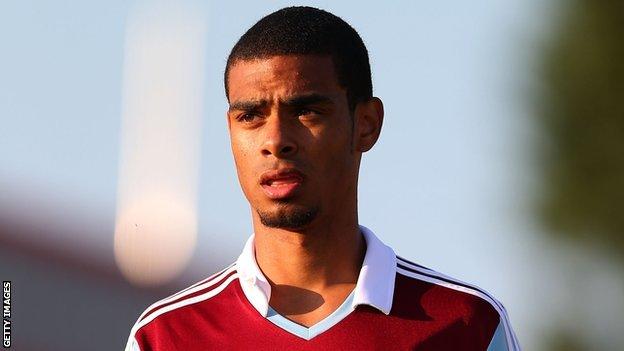 Hearts have signed West Ham striker Paul McCallum on loan until the end of the season.

McCallum, 20, has spent loan spells at Rochdale, AFC Wimbledon, Aldershot and most recently at Torquay United.

He will training with his new team-mates on Friday and is line to feature in Sunday's League Cup semi-final against Inverness CT.

However, Hearts have been told that they will not be able to sign Rudi Skacel as a replacement for goalkeeping coach Alan Combe whose playing contract was ended.

The 34-year-old former Czech Republic international, who has had two spells with Hearts, is a free agent after leaving Slavia Prague.

He has been training with the Edinburgh club, who are subject to signing embargo as a result of entering administration.

However, the SPFL will consider requests to sign players on a one-in, one-out basis.

"He has a good pedigree, is powerful, good in the air and can score goals.

"I am sure he will be a good asset to the squad and he gives us an extra option, and is something different to what we have here.

"Hopefully he does well for us and can hit the ground running."