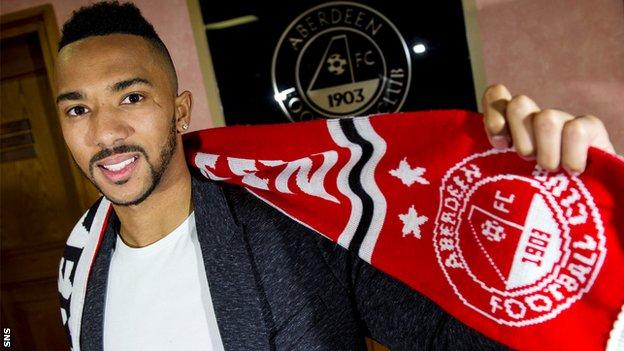 The 26-year-old former Manchester City youth player is due to be out of contract in the summer.

Logan joined Brentford from City in 2011 after loan spells at Grimsby, Scunthorpe, Stockport and Tranmere.

He's got good experience and, while he's predominantly a right-back, he can play at left-back or in midfield as well

Meanwhile, midfielder Chris Clark has left Aberdeen by mutual consent after having his contract terminated.

And for the remainder of the season.

Logan has been in and out of the Bees' first team so far this season in League One.

"I first knew of Aberdeen's interest earlier in the week and I can't wait to get involved," Logan told Aberdeen's website.

"There are so many big matches coming up and obviously I want to get playing as quickly as possible.

"The fans can expect a player who gives 110% in every game and I would describe myself as an attacking full-back."

Manager Derek McInnes has already added and to his Aberdeen squad during the January window.

"He's got good experience and, while he's predominantly a right-back, he can play at left-back or in midfield as well," said McInnes of Logan.

"He also knows Nicky Weaver and Willo Flood from his Manchester City days and Niall McGinn from his time at Brentford."

Of Clark's departure, Aberdeen said in a statement: "A long-standing servant of the club, Chris has fully recovered from the injury he sustained in a pre-season game in Ireland but has been unable to force his way into first-team contention."