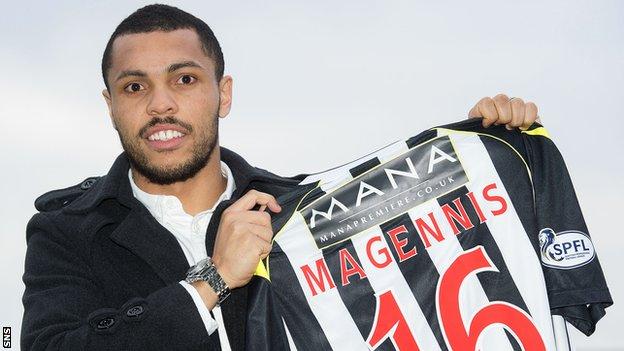 Josh Magennis has agreed to join St Mirren on loan from Aberdeen until the end of the season.

The 23-year-old Northern Ireland international has been with the Dons since 2010 and has played in attack and at right-back.

The former Cardiff player in May but in October.

But manager Danny Lennon is still assessing potential recruits for his forward line.

"Josh has pace and strength and will add a few other dimensions up top for us," he told the Buddies' website.

"He has scored some notable goals at this level and has the potential to do really well for us. He is also accustomed to playing a few different positions, which may come in handy for us.

"We were keen to take him permanently, but [Aberdeen manager] Derek McInnes wasn't keen to let him go, as he thinks the lad has great potential. We do too.

"Josh comes here with a point to prove that he deserves more starts at this level and we want to harness that hunger and desire.

"We continue to work hard behind the scenes to add additional competition for starting places in our squad for the remainder of the season.

"One area we have been looking at is our striking options. We feel we haven't had enough options in that area over the season so far and want to add one more asset into that equation.

"We brought Nacho Novo in for a chat. We are no longer pursuing this avenue."

Magennis described his season so far as "frustrating" and decided to pursue a move after the Dons signed forward Adam Rooney.

"Derek McInnes likes to play with one up front and there was already four target men at Pittodrie. I wasn't really playing much but once Adam came in, it opened up the door for me to go on loan.

"I had a chat with Derek and he didn't want me out. He said if I wanted to stay then perfect but understood if I'd like to try somewhere else.

"I realised I had probably dropped down a notch in terms of the strikers and that's fine.

"Danny Lennon then reached out to me and said he could offer me more opportunities than I was getting at Aberdeen. It was an easy sell."

McInnes told Aberdeen's website: "To be fair to Josh, he needs to playing regularly in order to have a chance of winning himself a new deal.

"We'll be monitoring his progress at St Mirren and we certainly haven't closed the door on him."