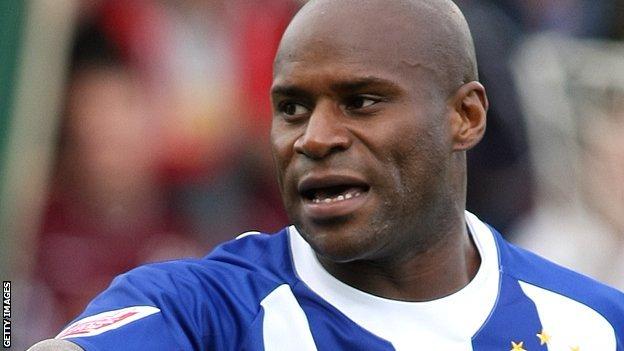 Colwyn Bay manager Frank Sinclair says the club can "smell the play-offs" after an impressive recent run of seven wins from nine games.

Bay are now in ninth place in the Conference North table, eight points outside the play-off places.

However, they have games in hand on five of the teams above them.

"The main thing [this season] was progression, but we can smell the play-offs now. Are we getting greedy? Absolutely," Sinclair told BBC Sport.

"There are some really big games coming up in February and March; we play all the teams above us.

"By the end of March we will know what's what and if we are serious about the play-offs.

"No team has been outstanding. It's really tight at the top."

Sinclair's side only narrowly avoided relegation in 2012-13 after a remarkable late end-of-season surge.

A new-look side struggled to find consistency at the start of this campaign, but following a draw against Brackley on 30 November, they won six games in a row and were within three points of the play-off places until a couple of postponements halted their climb.

Former Chelsea and Leicester City defender Sinclair, 42, continued: "Four or five weeks before we went on that run we were in good form. It was just not quite happening, whether it was down to a bit of bad finishing or some sloppy defending.

We have strengthened a lot - in all areas - and now I am not afraid to make changes. There was no depth last season

"But I had the belief because of the performances and I said the results will come - and they have.

"We have been playing really well, scoring lots of goals and the only game lost in the league since December was against Worcester - and you have to give them credit.

"In the second half they played really well and since then they have picked up a bit so there was no disgrace in losing to them."

Sinclair, who signed a one-year contract at the start of the season, believes the team is beginning to look more settled and get the results they deserve.

He said: "We have a strong squad of around 16 players who are all vying for places. I have no worries with the squad.

"We have strengthened a lot - in all areas - and now I am not afraid to make changes. There was no depth last season.

"The players that stayed on have raised their game and they have had to."