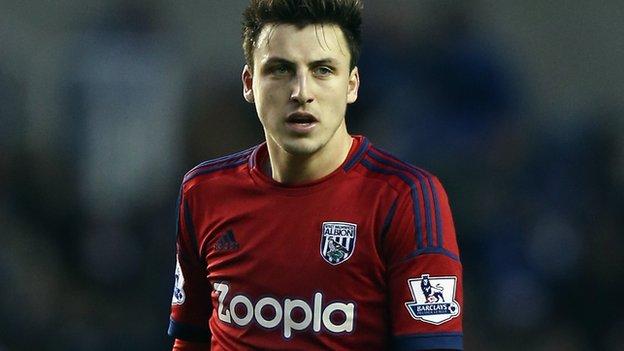 West Bromwich Albion midfielder George Thorne has joined Derby County on loan until the end of the season.

He has already made eight Championship appearances this season during a month-long loan spell at Watford.

The 21-year-old has played 17 games for the Baggies since 2009, but has not featured for the Premier League club this term.

"He went to Watford and we kept a close eye on him. He has been back at West Brom for a month now and we feel at this stage we need back-up in in that midfield area.

"It's an ideal opportunity to bring him here to help us, and also for us to help him."

The former England Under-19 international made his comeback from a serious knee injury with Watford in November, having been out for 10 months.

Before being sidelined, Thorne scored once in seven games during a loan spell with Peterborough last season. He previously also made 14 Championship appearances on loan for Portsmouth in 2011-12.

Meanwhile, Derby have confirmed that on-loan Manchester United defender Michael Keane has returned to the Premier League club after making eight appearances for the Rams since November

Goalkeeper Saul Deeney, 30, has had his Derby contract cancelled by mutual agreement after playing just three games for County since joining the club from Burton in 2009.