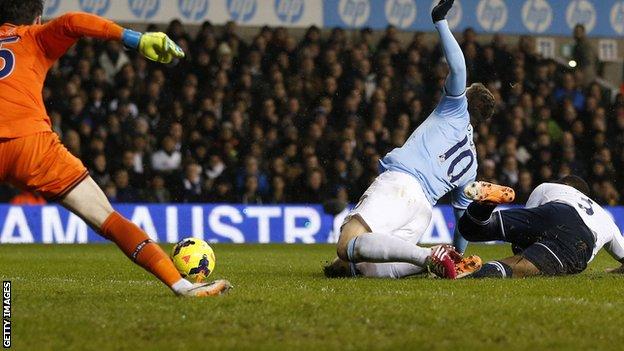 Tottenham's appeal against Danny Rose's red card in the 5-1 home defeat by Manchester City has been upheld by the Football Association.

Rose, 23, conceded a penalty - scored by Yaya Toure - for bringing down Edin Dzeko when City were leading 1-0.

Television replays showed the full-back made contact with the ball, but he was sent off by referee Andre Marriner for denying a goalscoring opportunity.

Rose, who was facing a one-game ban, is available for Saturday's game at Hull.

His challenge in the 50th minute of Wednesday's match initially looked to have gone unpunished, but Marriner took advice from an assistant referee and awarded the foul.

Dzeko scored a third within two minutes of Rose's dismissal and City eventually won 5-1, moving top of the table with their victory in north London.

Spurs manager Tim Sherwood argued his defender made contact with the ball as he made the challenge, but conceded his side were finding it "very difficult" against the visitors prior to the red card.