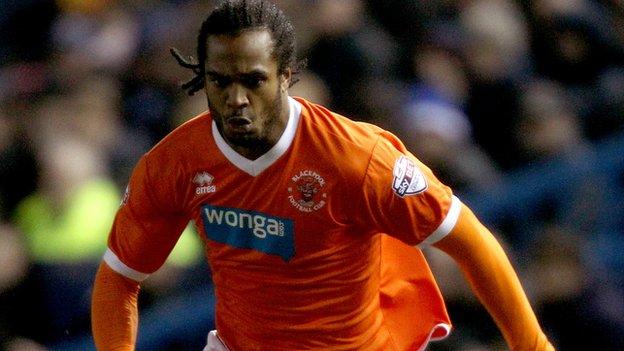 Coventry City have signed Aston Villa striker Nathan Delfouneso on loan until the end of the season.

The 22-year-old Villa academy product has spent the first half of the season on loan at Championship side Blackpool.

But he has been persuaded to drop another level to League One, to replace Wolves-bound top scorer Leon Clarke.

Facts on 'The Fons'

As well as having lost 18-goal Clarke, the promotion-chasing Sky Blues are currently without his co-striker Callum Wilson, who has a shoulder injury.

"Nathan had always been high on our shortlist for this window," said Sky Blues boss Steven Pressley.

"We'd pursued him for a number of weeks so we are absolutely delighted to be able to bring him in.

"I have been saying throughout this month that we wanted to add strikers in this window so to get someone of Nathan's calibre through the door is exactly the kind of business that we want to be doing.

"He has a great level of experience for somebody of his age and his ability is something we feel will give us the kind of attacking threat that we want."

BBC Radio WM's sports team will be on air until 23:50 GMT (95.6 FM and online) on Friday to stay on top of any late January window deals.

Birmingham-born England Under-21 international Delfouneso made his breakthrough as a 17-year-old with Villa six seasons ago, netting three times in his first four starts.

He scored three times the following season, including his first Premier League goal, a late winner in a 2-1 win at Portsmouth.

But he was loaned out to Burnley for the final two months of the season in March 2011.

He then went on a month's loan to Leicester City in January 2012.

He spent most of last season with Blackpool, scoring seven times in 43 appearances, but, after returning for a second loan at Bloomfield Road in August, he has found his chances limited, making just three starts.