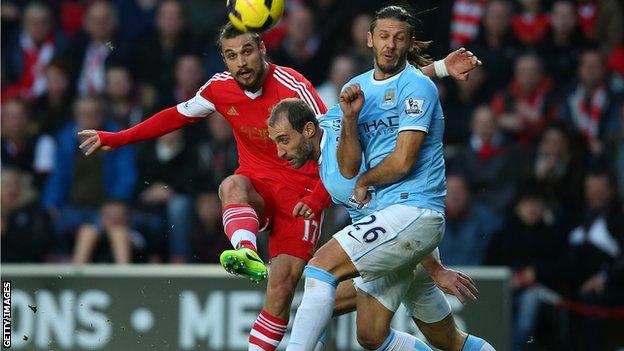 Osvaldo is currently suspended by Southampton after a training-ground fight with team-mate Jose Fonte.

The Italy international, who moved to St Mary's from Roma last summer for a club-record fee of £15m, has scored three goals in 13 appearances.

His last goal came in Saints' 1-1 draw with Manchester City in December, but a week later his part in a touchline fracas at Newcastle saw him banned and fined £40,000 by the Football Association.

Osvaldo, who was born in Argentina and started his career at Huracan, was suspended by Roma in 2011 for punching team-mate Erik Lamela, now of Tottenham, during a 2-0 defeat by Udinese.

He admitted to missing Italian football during his "exciting experience" in England.

"I'm very happy, it's all been a bit of a whirlwind and I still can't quite believe it," he told his new club's website.