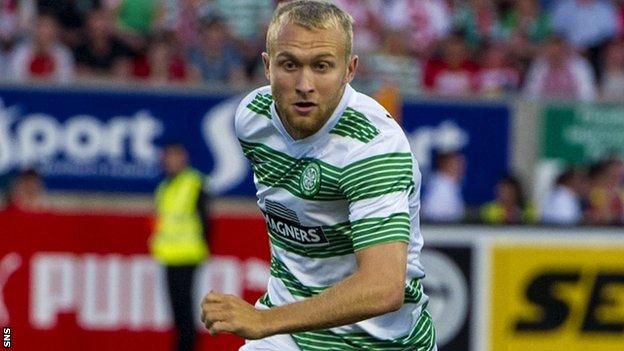 Celtic midfielder Dylan McGeouch has joined League One side Coventry City on loan until the end of the season.

The Scotland Under-21 international has featured only three times for Neil Lennon's side this season.

Glasgow-born McGeouch, 21, has been one of the main targets for Coventry's manager, former Celtic stopper Steven Pressley, throughout the window.

"Dylan is exactly the kind of player that we want to get through the doors at this club," said Pressley.

"In terms of his work ethic, his attitude and his ability. He is young, very hungry and has enormous potential.

"He's very comfortable in possession. He's a player that I believe is a game changer.

"There is still a lot of football to be played this season and lot of points to play for and I want Dylan to be a part of that."

McGeoch made his Celtic first team debut in 2011 but, after scoring early in his career against St Mirren, during a friendly with Real Madrid in August 2012.

However, his first-team opportunities this term have been restricted, with Celtic unbeaten in the Scottish Premiership.

"This is the next chapter of my career," he said. "It's good to finally get the loan sorted because I'm looking forward to the opportunity of playing regular first team football.

"There's also a lot of Scottish people here and it's good to have them about, the likes of John Fleck and big Andy Webster, but I'm looking forward to fitting in with the whole squad.

"I like to attack, I like to get further up the pitch and I obviously like to get amongst the goals as well, and if I can do that and help get good results for Coventry then that would be perfect."