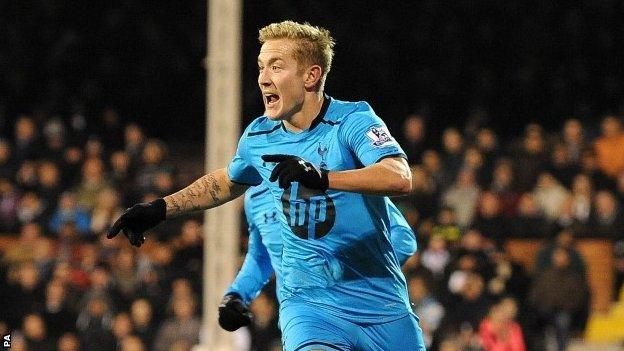 Fulham have signed Tottenham midfielder Lewis Holtby on loan for the rest of the season.

However, the German international has struggled to establish himself under Tim Sherwood.

"Fulham have put much effort into Lewis. It is a very well-run club with an excellent manager in Rene Meulensteen," Holtby's agent Markus Noack told BBC Sport.

"The system and philosophy of how Fulham play fits well with Lewis. He will have match practice in the second half of the season in his favourite position and then we'll see how things are going by the summer."

The Craven Cottage club are also hoping to fend off interest from West Ham for Olympiakos striker Kostas Mitroglou, with representatives of the 25-year-old at Fulham's Motspur Park training ground on Friday.

Although West Ham have offered a more lucrative deal, the Cottagers are still keen to complete the signing, but are reluctant to increase their offer for a player understood to be carrying an injury.

Fulham are also considering a move for Everton's Dutch defender John Heitinga, with Meulensteen identifying his compatriot as the replacement for Aaron Hughes who has moved to QPR on a free transfer.

Heitinga, 30, has made only one substitute appearance in the Premier League this season and needs game time to boost his hopes of playing at this summer's World Cup.