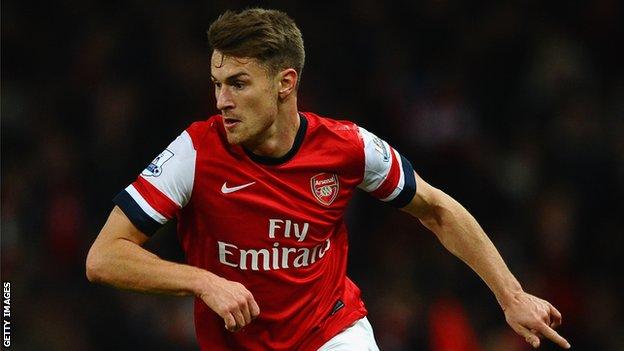 Arsenal midfielder Aaron Ramsey could be sidelined for a further six weeks, according to manager Arsene Wenger.

The Wales midfielder, 23, has already been out for a month after suffering a thigh injury during the 3-1 win over West Ham in December.

Ramsey's absence is a major blow to Arsenal's title challenge as they target a first major trophy since 2005.

The Gunners are currently second in the Premier League table, one point behind Manchester City with 15 games left.

Ramsey has been one of Arsenal's stand-out performers this season and has scored 13 goals in 27 appearances in all competitions.

If he is ruled out for the full six-week period, he would miss a number of important fixtures, including Premier League games away to Liverpool on 8 February and at home to Manchester United four days later.

He could also miss both legs of Arsenal's Champions League last-16 tie against holders Bayern Munich. Arsenal are due to host Bayern on 19 February, with the return leg on 11 March.