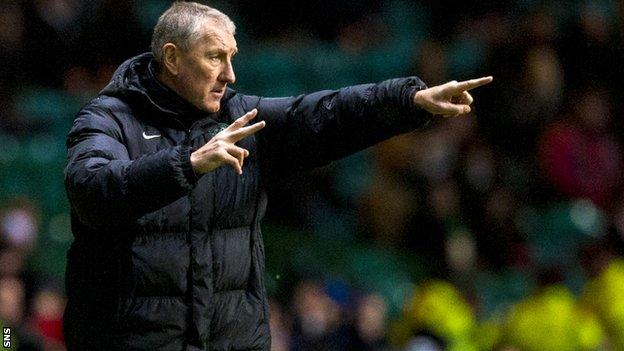 Hibernian have taken Arsenal defender Daniel Boateng on loan for the rest of the season, along with Danny Haynes and Duncan Watmore.

Boateng, 21, can play at right-back or in central defence and has had previous loan spells at Swindon and Oxford.

Haynes, 26, operates as a winger or a striker and arrives at Easter Road from Notts County.

Watmore, 19, is also an attacking player who can play out wide and is a development player at Sunderland.

Hibs have only managed 21 goals in 24 Premiership games this season and boss Terry Butcher is delighted to have bolstered his forward options.

"Danny is an extremely quick forward, who can play anywhere up front," he said. "I've followed his career since he made the breakthrough at my old club, Ipswich Town and he has scored goals wherever he has played.

"He will add extra experience, pace and quality to our forward line.

"Duncan is a quick, direct winger with a good work-rate. He is a young player, who has impressed me with his intelligence on the pitch, eye for goal and quality deliveries into the box.

"Duncan has already made his first team debut at Sunderland and he is highly-rated by the coaching staff there; we're pleased to be able to add him to the squad."

Butcher will also be pleased to have defensive cover after shipping four goals to Celtic, with Paul Hanlon and Ryan McGivern absent through injury last weekend.

"He's a big boy," said Butcher of Boateng. "He's probably the most robust of Arsenal's defenders, including the first team. He's comfortable on the ball and he can play at right-back or centre-back, a holding role in midfield as well. He'll add strength and variation to our back four."

Meanwhile, Hibs have released Tim Clancy and Rowan Vine from their contracts.

The 31-year-old Vine until the end of the season.

Clancy has been at Easter Road since the summer of 2012, but the 29-year-old former Kilmarnock and Motherwell defender has been dogged by a succession of injury problems.