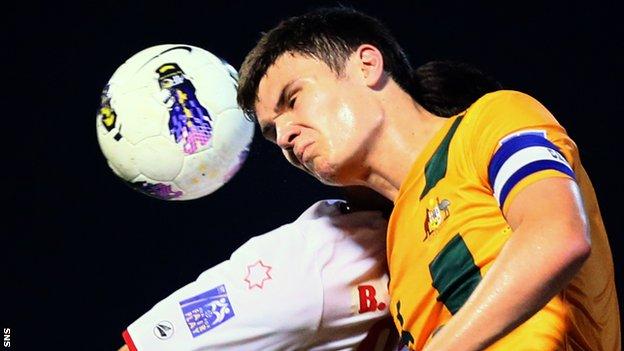 Dundee United have signed defender Curtis Good on loan from Newcastle for the rest of the season.

The 20-year-old Australian will go straight into the squad for Saturday's trip to Partick Thistle, subject to international clearance.

Good moved to St James' Park on a six-year contract from Melbourne Heart in July 2012.

He played in a Capital One Cup win at Morecambe in August following a brief spell on loan at Bradford last season.

United boss Jackie McNamara said: "Curtis comes to us highly recommended and from a well-respected club.

"He is left-footed and can play as either a central defender or left-back.

"These are areas that require cover and it was important this was addressed during the window.

"He is 6ft 1in and strong and should give a different option to the defenders already at the club.

"I am very happy to have this deal completed; it offers Curtis the opportunity to get some game-time whilst enhancing our squad for the latter part of the season."

Meanwhile, United have sent two young out on loan and released another.

English striker Kudus Oyenuga, a 20-year-old who arrived in the summer after leaving Hayes & Yeading United, has returned to the Conference South with Boreham Wood.

Fellow forward Jordan Moore has returned for a second spell on loan to Dunfermline Athletic in Scotland's League One.

The former Scotland Under-19 international previously had two loan spells at Balmoor and spent the first half of the season in League One with Stenhousemuir.