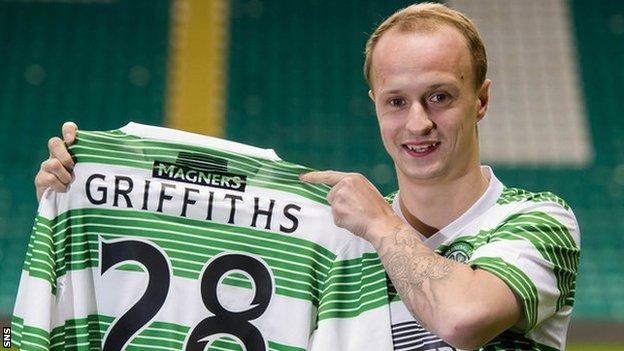 Leigh Griffiths has completed his transfer from Wolves to Celtic, signing a four-year contract after a fee was agreed between the clubs.

The 23-year-old Scotland striker said: "The chance to come to Celtic is a once-in-a-lifetime opportunity and you've got to grab it with both hands.

"I've left a very good club down at Wolves, but I'm coming to the biggest club in Scotland.

"The gaffer knows what I can do. Hopefully I can add goals."

Griffiths has been capped four times by Scotland and scored 39 goals over the previous two seasons on loan at Hibernian.

I'll still be a Hibee as long as I live, but to play for Celtic is a once-in-a-lifetime opportunity that you can't turn down

But he believes joining Neil Lennon's side is the chance "to win things, play in the Champions League, hopefully, and get better as a player".

"I've only played a handful of games for Scotland and I don't think I've done myself justice so far," said Griffiths, acknowledging that some Celtic fans have questioned his credentials on social media site Twitter.

"But there is no bigger place to play than the Champions League and hopefully in six months' time I'll be doing that.

"It's up to me to show the fans what I can do. I've not got off to the best of starts with some Celtic fans, but hopefully I can win them over."

Griffiths signed a new deal at Molineux in the summer and has scored 13 goals in 32 appearances this term.

However, Wolves this week signed having already secured to bolster their attacking options, and Griffiths was relieved to complete his own transfer.

"I'm delighted it's finally done," he said. "I think it was the middle of December that I first heard there was interest.

"The first time I spoke to Neil was this morning at the training ground. He was very easy to talk to.

"He told me what he wanted from me and I told him what I would bring to the team."

Edinburgh-born Griffiths' love of his own local club is well documented and he said: "If it wasn't Hibs I was to come to, it would only be Celtic.

"I'll still be a Hibee as long as I live and it will be good to go back there to play against them, but to play for Celtic is a once-in-a-lifetime opportunity that you can't turn down."

Before completing the deal for Griffiths, Celtic this week failed in a bid for a player currently plying his trade in Turkey, but the player and his current club could not reach the necessary agreement to allow the transfer to proceed.

Lennon told BBC Radio 5live: "Strikers are at a premium and in today's climate it is really difficult for us to compete with Premier League money.

"We tried to get a player in from Turkey. He had a £3m clause in his contract. We agreed that, but we couldn't get the deal done at the other end. It just became very complicated."

Lennon was sure that Griffiths would make his mark with the Scottish champions.

"He had a brilliant season last year with Hibs," he said. "He scored 29 goals. I think he is the leading goalscorer at Wolves.

"We've been looking for a penalty box player and Leigh fits the bill.

"We think he is value for money and at 23 we think he'll get better.

"He knows the environment here in Scotland as well. It's up to me to develop him into a more rounded striker."

Griffiths' switch to Celtic Park will earn Dundee around £150,000 because of a sell-on clause in the deal that took the striker to Molineux from the Scottish Championship outfit for that amount in January 2011.

As one striker arrives, Celtic have terminated the contract of another, Mo Bangura.

The 24-year-old signed from AIK in Sweden in 2011 but was sent back to his former club on loan having failed to make an impact in Scotland.

He then had a spell with Elfsborg, playing against Celtic in a Champions League qualifier this season, before returning to the Scottish champions in December.