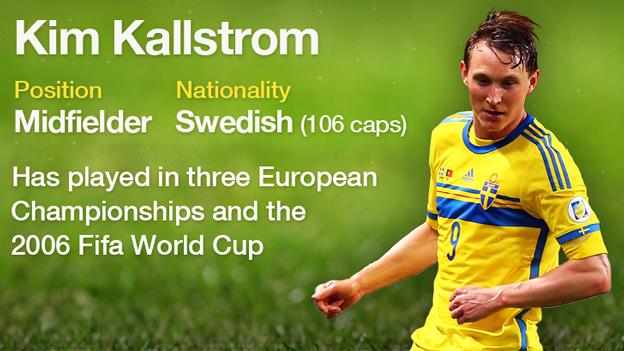 Arsenal have completed the signing of Sweden midfielder Kim Kallstrom on loan until the end of the season from Russian club Spartak Moscow.

The 31-year-old will provide cover for the injured Aaron Ramsey and Jack Wilshere, while Mathieu Flamini is suspended for the next three games.

Wenger said: "He has proven quality at both club and international level. We welcome Kim to Arsenal."

Kallstrom said: "Arsenal is an amazing club with a lot of great players and a coach who has done really well here for a long time.

"I am so pleased to come here to learn as much as possible. I'm here to do my best for Arsenal and to help out the team, so we can achieve good results for the last part of the season."

The Draxler situation has been created by the newspapers, not by me... he will stay at Schalke

Kallstrom joined Spartak in 2012 following a six-year spell with Lyon, where he played more than 200 games and helped the French side to the Champions League semi-finals in 2010.

Wenger added: "We've been hit by the red card of Flamini, and Jack Wilshere is also not available. So in the area where we had plenty of players, suddenly we are a bit short."

Attacking midfielder Draxler, 20, who has played 10 times for Germany, was linked with a move to Arsenal and reportedly would have cost £37m.

He helped Schalke make it out of the group stage of the Champions League before Christmas.

The German side will play Real Madrid over two legs in the last 16.

"The Draxler situation has been created by the newspapers, not by me. He will stay at Schalke," said Wenger.