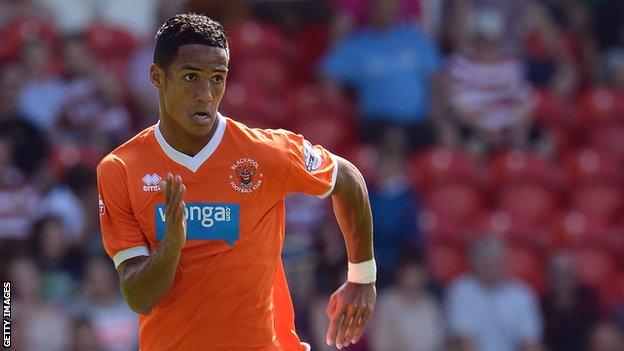 Ince, 22, joins Palace on loan until the end of the season.

Wales international Hennessey, 27, moves for £3m and has signed a three-and-a-half-year contract.

Ledley and Puncheon, both 27, and 26-year-old Dann join the Premier League strugglers for undisclosed fees.

Puncheon has signed a four-and-a-half-year deal after a successful loan spell and Dann joins for three and a half years.

Ince is out of contract with Blackpool at the end of the season, although the Tangerines will be due a fee if he moves because of his age.

Crystal Palace's window has been interesting. The surprising thing to me is £3m on goalkeeper Hennessey. I think Julian Speroni has done really well over a number of seasons. Tony Pulis is bolstering his squad while looking to the summer when he may ship a few players out.

The Championship club, who sacked his father Paul as manager earlier this month, agreed to let him move on loan to the Premier League for the rest of his contract. He had also talked to Hull, Sunderland and Swansea.

"It's never nice to leave a club like Blackpool, who have done ever so well for me," the England Under-21 international told BBC Radio 5 live.

"I had three fantastic years there, but when an opportunity like this comes around... as soon as I met [manager] Tony Pulis and [co-chairman] Steve Parish at Palace it felt like the right thing for me.

"It's amazing how well Tony has done there since he came in. He said to me I was someone he needs, someone who can run at people and create some magic in the final third."

Dann cost Blackburn £6m from Birmingham City in 2011 and has made 26 appearances this season.

Hennessey spent the first half of the season on loan at Yeovil after recovering from a knee injury suffered in April 2012.

He has not played for Wolves since refusing to turn out against Gillingham in early January, for which he later apologised.

Puncheon initially moved to Palace on a season-long loan in August, but has now joined the Eagles on a full-time basis.

"I thought it might happen at the end of the season but it's come quicker and that's good for both me and the football club," he said.

Ledley had been offered a new deal at Celtic Park, with his current contract running out this summer, and the club have decided to sell for a fee rather than wait for him to leave for free.

The Wales international moved to Glasgow under freedom of contract in 2010, following six years at hometown club Cardiff.

"I am over the moon as it's every boy's dream to play in the Premier League," Ledley told Palace's website.

"I have played in the Champions League and I look forward to the challenge ahead. It is going to be difficult, but we have brought in some fantastic players."

Palace have loaned 20-year-old midfielder Jose Campana, a summer signing from Sevilla, to Nuremberg until the end of the season.

The German side have the option to make the deal permanent.

And Wales international Darcy Blake has been released by Palace.

The 25-year-old defender joined the Eagles from Cardiff City in August 2012 on a three-year contract but after playing 11 games suffered a serious knee injury the following December and has not played for Palace since.