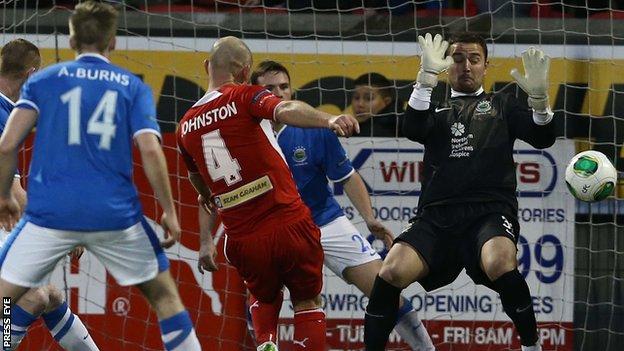 Linfield boss David Jeffrey is calling on his players to make up for a poor performance at Solitude in November.

The Premiership's top two clash again this Saturday and another Cliftonville victory would see them cut Linfield's lead at the top to just two points.

"The last time we were there we did not do ourselves justice," said Jeffrey referring to that 3-0 defeat.

"We did not give a good account of ourselves and the players know they have to do an awful lot better."

Linfield could have gone eight points clear if they had beaten bottom club Ards in their last fixture - but they blew a 3-1 lead and ended up dropping two points in a 3-3 draw.

Jeffrey admitted that was frustrating, but expressed overall satisfaction at having a five-point lead at the top of the table.

Cliftonville may be on a high after winning the League Cup final in a penalty shoot-out against Crusaders, but Tommy Breslin's men want to make up for losing their last Premiership fixture at home to Portadown.

Third-placed Crusaders go to Ballinamallard urgently needing to improve on a faltering challenge which has seen them win just one out of their last seven in the league.

The Crues will have new signing Richard Clarke available and the former Glentoran midfielder will go straight into Stephen Baxter's squad for the trip to Ferney Park.

Portadown will aim to make it four successive league victories when they take on Ballymena United at Shamrock Park.

Ballymena will have defender Tony Kane and midfield man Gavin Taggart available after suspensions, but central defender Johnny Taylor remains on the sidelines as he completes a two-game ban.

Coleraine will hope their recent revival in fortunes continues as they travel to Dungannon Swifts, a week before the teams clash again in the sixth round of the Irish Cup.

Glentoran's big downfall this term has been their dreadful home record - Eddie Paterson's men have won just three of their 13 league matches at the Oval.

However, one of those victories was over Saturday's opponents Warrenpoint Town and the Glens would no doubt settle for a repeat of the 3-0 scoreline back in December.

Ards, heartened by their draw away to Linfield last week, travel to Glenavon but team boss Niall Currie will not be on the touchline at Mourneview Park as he is serving a one-game suspension.