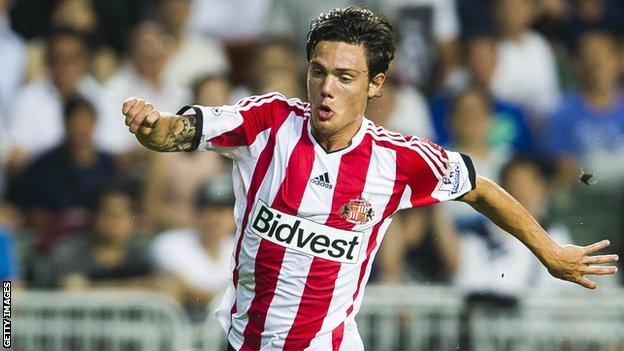 Kilmarnock have taken Swedish winger David Moberg Karlsson on loan from Sunderland for the rest of the season.

The 19-year-old moved to the Black Cats for an undisclosed fee last summer, following three years at Gothenburg.

He signed a four-year deal but has played just once for Sunderland; starting in August's Capital One Cup win over MK Dons.

But defender Ismael Bouzid, 30, is staying on after signing a new six-month contract.

"I have to thank the manager for showing his faith in me," said the 30-year-old Algerian international, who could feature against Ross County on Saturday after returning to training.

"It has been a tough time for me with the injury lately but the club has given me a new contract, which is a huge weight off my mind.

"Now I hope to do my best for the club and try to repay them for their support."

On his new loan signing, boss Allan Johnston enthused: "David is a quality player who can score goals, create chances and can play on both sides of the park.

"It gives us different options and puts pressure on the players already in the side to perform.

"He has already played for Sunderland's first team during a pre-season tournament in Hong Kong, when he scored against Tottenham. He's gone there with a big transfer fee, so I suppose that gives you an idea of the quality he has.

"He's still young and definitely isn't the finished article, but he has talent and hopefully will make a big impact."