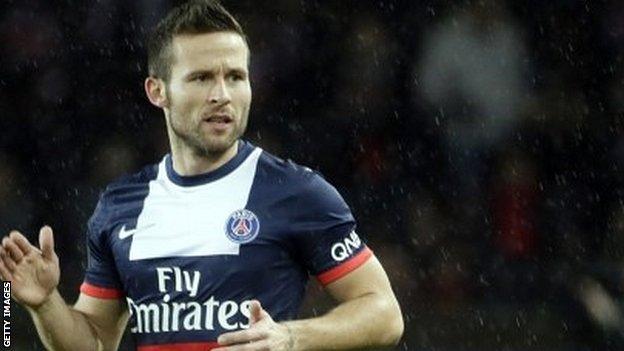 Yohan Cabaye came within inches of scoring on his debut for Paris St-Germain as they beat stubborn Bordeaux.

PSG barely troubled their visitors on a wet night before finally making the breakthrough in the 58th minute, when Zlatan Ibrahimovic tapped in.

Alex added a second for the Ligue 1 leaders late on when he swept in fellow Brazilian Lucas Moura's low corner.

The France international, who joined the French champions from Newcastle in a £19m deal this week, also fired in a 20-yard shot that drifted two yards wide.

Apart from their goals, PSG only created one other clear-cut chance, with Argentine midfielder Javier Pastore's 10-yard shot easily saved by Cedric Carrasso.

Victory for PSG moves them to 54 points, six ahead of second-placed Monaco. who are at Lorient on Saturday.