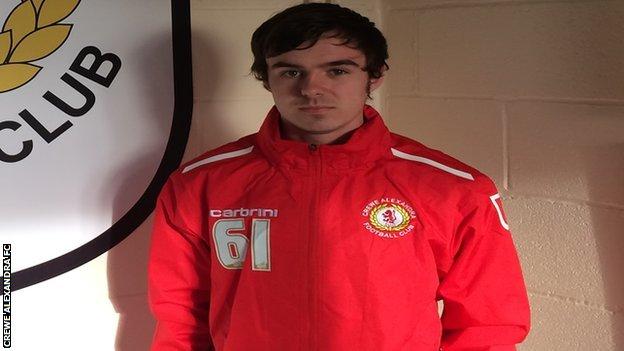 Johnston, who has been training with the Alex for the last few weeks, will return on loan to Leek, Crewe assistant manager Neil Baker's former club.

But the 19-year-old will carry on training at Crewe to be further assessed by the Alex coaching staff.

The Alex in the window

"This is his big chance. He must not waste it," Crewe boss Steve Davis told BBC Radio Stoke.

"It's always a big opportunity for these lads who have only known non-league football and we'll have to change his ways in terms of his dedication to the game.

"I've already had that conversation with him. He's got to make the most of it.

"He's been training with us for a week or two, he's doing ok and now we're looking forward to seeing him in a game."

Despite Crewe's uncomfortable position in League One, just a point above the relegation zone, having already brought in Watford striker Uche Ikpeazu, Davis was not expecting to make any further signings before the Friday's 23:00 GMT deadline.

"It's more for the Premier League and Championship clubs," he added. "I don't think there's much business done lower down. The finances aren't there."

But Davis does admit that, following this week's departure of Alan Martin, he will be looking for goalkeeping back-up for teenage number one Ben Garratt and veteran goalkeeping coach Steve Phillips when the loan market re-opens in seven days' time.

"We will certainly look at things again once the window re-opens," he said.

"Alan leaving has left us a keeper short. We have two, as well as young Robbie Johnson, but I would like to bring another one in.

"I would like an experienced keeper who can offer competition to Ben and Steve."