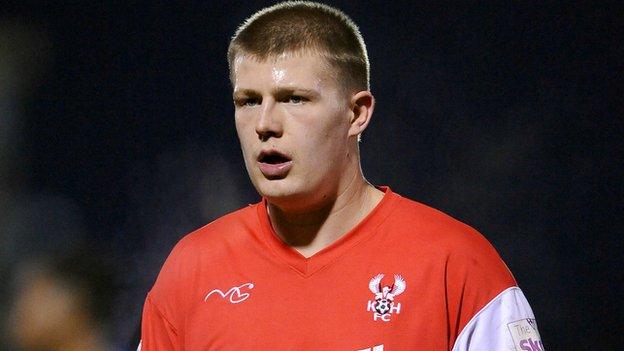 Kidderminster Harriers are keen to loan out last season's top scorer Anthony Malbon in an attempt to get him fit.

Malbon has struggled over the first half of the season, just as he did last term before ending up with 19 goals.

The emergence of Joe Lolley, who has since joined Huddersfield, led to him being dropped and Malbon, 22, has played just an hour since Christmas.

Anthony Malbon has so far been given just 31 minutes of playing time in the six matches since Andy Thorn took charge.

"Him going on loan is to benefit himself and to benefit us," boss Andy Thorn told BBC Hereford & Worcester.

"He needs to go out and play. He needs games to get himself fit, because he's not at the moment.

"For some reason, he's let himself go. He needs to get his head back on his football.

Even since Harriers sold Lolley for a six-figure sum, Malbon has still not won his place back.

It's nothing to do with wanting to get rid of Anthony Malbon. Let's put that one to bed

He was overlooked by Thorn when Harriers' 4,000 away fans were calling for his introduction as their third substitute in the narrow 1-0 FA Cup fourth round defeat at Sunderland - and he has not even made the bench for the last two matches.

But the Stoke-born former Port Vale trainee, who signed a new two-year deal in March 2013, showed last term that he may be more of a second half of the season player.

By this stage of the campaign a year ago, 12 months on from his £7,000 arrival from Newcastle Town, he had only hit four goals - two less than this season's haul.

But he then hammered in a prolific 15 in 19 matches over the final three months of the season to steer the Harriers within two points of automatic promotion.

And, having dismissed any suggestion that Malbon might be allowed a deadline day move to join his old Harriers boss Steve Burr at Chester, Thorn hopes that a loan move to below Conference Premier level can help him regain full match fitness.

"He wasn't going to Chester. I don't know where that came from," said Thorn.

"It's nothing to do with wanting to get rid of Anthony Malbon. Let's put that one to bed.

"I need him to be playing and scoring goals for us."