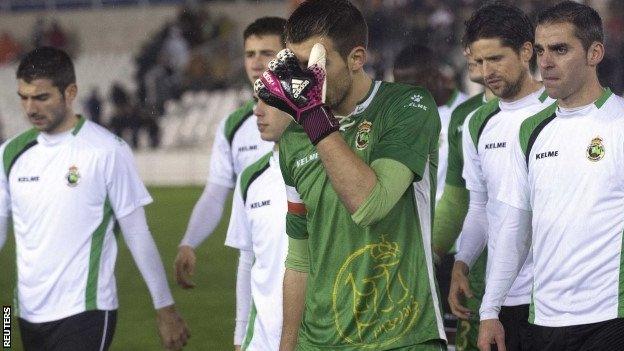 Racing Santander have been banned from next season's Copa del Rey after their players boycotted Thursday's game with Real Sociedad over unpaid wages.

The players carried out their threat not to play the quarter-final second leg unless club officials quit, with captain Mario Fernandez saying they had not been paid for several months.

Sociedad were declared the winners and will play Barcelona in the semi-finals.

Having lost the first leg 3-1, Racing's players turned up at their El Sardinero ground and completed their warm-up.

But, after Sociedad kicked off, they stood arm in arm around the centre circle, with substitutes and coaching staff lining up in solidarity on the touchline.

The referee led the players off the pitch and the match was abandoned.