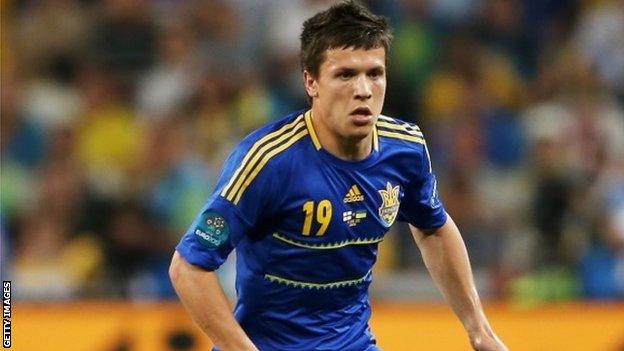 The Reds agreed a deal with the player, who was keen on the move, but Dnipro's owner did not sign the paperwork.

The 24-year-old, valued at £15m, emerged as the Reds' main January target after Basel's Mohamed Salah instead chose to join Chelsea for £11m.

Boss Brendan Rodgers told the club website: "I'm very optimistic with the group I still have."

The Northern Irishman admitted he "would like to have strengthened" but said failing to sign Konoplyanka was not "because of a lack of work by the football club".

"There are lots of people who have worked tirelessly to identify and find the right types of players," added Rodgers, whose team are fourth in the Premier League.

"If you look at the position that we're in with 15 games to go, we have shown consistently that we have the squad to compete.

"If we can keep those players fit, and maximise the availability for the rest of the season, we can have a great chance to have a really good finish."

Konoplyanka, who has 35 caps, scored at Wembley in a 1-1 draw against England in September 2012.

The forward, who can play wide on the left or up front, has scored 25 goals in 125 league games for Dnipro.