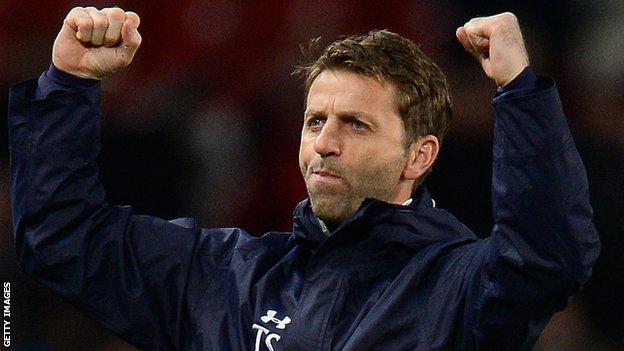 Tottenham boss Tim Sherwood turned down the opportunity to strengthen his squad on transfer deadline day.

Spurs have previously been active in the hours before a transfer window closes, making late moves for the likes of Jermain Defoe and Robbie Keane.

But Sherwood, whose side were beaten 5-1 by Manchester City on Wednesday, believes he has a squad strong enough for a top-four finish.

"I don't need anyone else, thank you very much," he said.

"Chairman Daniel Levy asked if I want to strengthen, but I'm confident in the players we've got."

Sherwood added he, Levy and technical director Franco Baldini were "in this together".

The former Spurs midfielder said: "They can bring them in but they won't play. Unless we're all in agreement they don't bring them in, because there's no point.

"It's not always the [right] way, just to buy players. We need to put things together like a jigsaw and I've got real trust in the players that we've got."

Spurs were involved in one piece of transfer business on deadline day, with midfielder Lewis Holtby joining Fulham on loan until the end of the season.

"I can't see him not playing regularly at Fulham and we look forward to welcoming him back in the summer," added Sherwood.