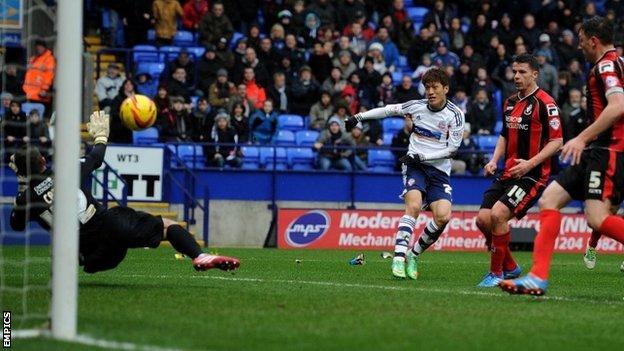 Bournemouth fought back from two-goals down to draw with Championship strugglers Bolton at the Reebok Stadium.

Lee Chung-yong fired into the roof of the net to give the home side the lead, before Lukas Jutkiewicz made it 2-0 with a half-volley.

Lewis Grabban halved the deficit soon after Jutkiewicz's goal with a long-range strike.

The Cherries then secured a deserved point in the second half when Simon Francis headed in.

It was another disappointing result for Bolton boss Dougie Freedman, and the final whistle was greeted with boos by the home fans.

The Trotters are now without a win in seven league games and are 19th in the table, five points above the relegation zone.

For much of the first half, Bolton had been control and when Lee smashed in from Mark Davies's pass, it was a lead they deserved.

It got even better when a hopeful long ball by Alex Baptiste was controlled by Jutkiewicz and the on-loan Middlesbrough striker's sweetly struck half-volley flew into the net.

The two-goal advantage was short lived as Grabban rifled home with a 30-yard strike and Bournemouth almost equalised early in the second half, but Steve Cook's header went just wide.

However, the visitors were level just after the hour mark when Francis headed beyond Adam Bogdan from Ian Harte's corner.

The away side finished the game strongly and were unlucky not to take all three points as Yann Kermorgant's clever heel flick forced a good save out of Bogdan, who then denied Tokelo Rantie one-on-one.

"I think there are long-term scars at the football club with certain players here and I think we need to try and shake them off and move on.

"We need stronger characters. It's a setback but it's not the end of the world.

"I picked a very attacking team and I thought in the first 35 minutes we were value for money and two-nil up.

"But when any setback comes our way it affects us big style and that's what happened today."

"I felt we deserved to win. I was disappointed that we didn't take all three points.

"It's mixed emotions for me because when you're 2-0 down you're delighted to come back and get anything. But for the majority of the game I think we passed the ball better than Bolton, dominated possession and had more chances so it was a strange game.

"We took a couple of heavy beatings early on in the season and didn't respond well to chasing games.

"I think that we've learnt from that. I think we are a better side now and we showed good maturity today not to panic and try and chase the game early."