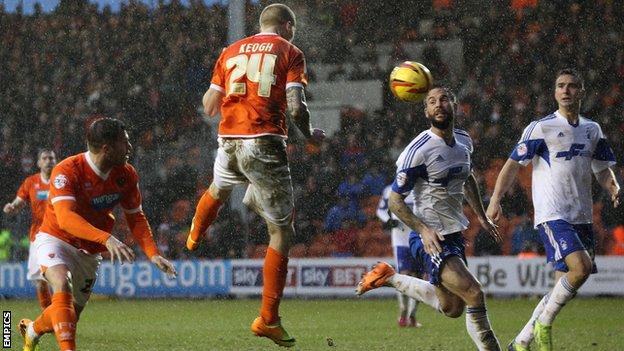 Jamaal Lascelles put the visitors in front on the stroke of half-time, poking home from close range.

Forest goalkeeper Karl Darlow was called into action in the second half when he pushed away Keogh's shot.

The visitors could have doubled their lead but Simon Cox was unable to reach Jamie Mackie's cross before Keogh headed in to earn his side a point.

Blackpool have now taken just three points from the last 39 available and have not won in 13 games in all competitions.

Promotion-chasing Forest will see the result as two points lost, despite extending their unbeaten run to 15 games.

They could have opened the scoring in the first 10 minutes when Andy Reid's free-kick was met by Greg Halford, who was superbly denied by goalkeeper Matt Gilks.

David Perkins broke in behind Forest, latching on to a Tony McMahon chip, and fired the ball across the box but no Blackpool player had anticipated the cross.

The visitors went ahead just before the interval as Lascelles struck home following Reid's free-kick.

On-loan Millwall striker Keogh could have grabbed an equaliser early in the second period but was unable to find a way past Darlow and Cox narrowly missed Mackie's ball into the box for Forest.

Caretaker manager Barry Ferguson sent on David Goodwillie, who nearly made an immediate impact after heading wide, but the home side levelled with four minutes remaining, as Keogh nodded in Jack Robinson's cross.

"I've got to be positive from the sidelines. We just needed that break but the goal was a really good goal. Great cross in and Andy Keogh was in the right place with the header.

"I wouldn't be sat here if I didn't believe a win was coming. I believe with the group of players now that the chairman has let me bring in that it's not far away.

"I've had a full week with a full squad and it's given me time to put into practice what style and what formation I want to play."

"Conditions played a huge part on the way the game was played. Very windy, very wet, the pitch was bobbly and soggy.

"I think it was very much a case of long ball rather than football. I've came to this club with very strong teams and picked up nothing.