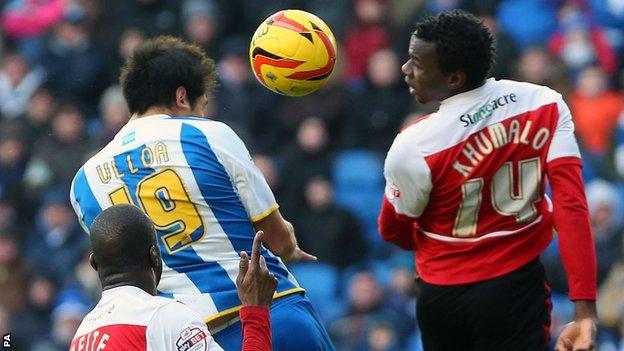 Leonardo Ulloa scored the winner as Brighton kept up their play-off push with victory over struggling Doncaster.

And Ulloa punished that miss on 75 minutes as he met Stephen Ward's cross from the left with a firm header to break the visitors' resistance.

Striker Sharp compounded his side's misery when he was sent off late on after tangling with Gordon Greer.

The result left the Seagulls four points from the play-off positions as they extended their unbeaten run at home to six matches.

Doncaster, who are five points above the relegation zone, proved a stubborn obstacle but remain without an away win in the league since September.

Argentine Ulloa gave warning of his aerial threat when he headed a Ward cross wide from 10 yards.

Sharp then went close to breaking the deadlock for the away side, only to nod wide from James Coppinger's cross.

Ulloa had a 20-yard curling strike kept out by keeper Sam Johnstone and Solly March's close-range effort was blocked by James Husband as Brighton pressed.

And they eventually broke through when Ulloa converted from Ward's cross, with Sharp sent off four minutes from time after clashing with Greer.

"We started really well but when you (miss) a lot of chances you can lose your confidence. We kept playing well and creating chances and finally Leonardo Ulloa took his chance well.

"[Speculation] doesn't affect the players because they know I am with Brighton. They are not new to football. They know how it works, that managers can be sacked at any time.

"So I don't think they will spend any second of their lives thinking about it at all. The players are happy and they know we have a massive game on Tuesday."

"We feel a bit unlucky. We were outstanding today. We knew they are a top team and we almost weathered the storm and got something from the game.

"In the second half we caused them some problems. We created more clear-cut chances throughout the game, so we feel that we've been done hard by.

"We've been on a good run lately and I'd like to think anyone that saw us would think that we can compete at this level.

"We're not stupid enough to dismiss the threat of trouble but we have a good chance of getting out of it."