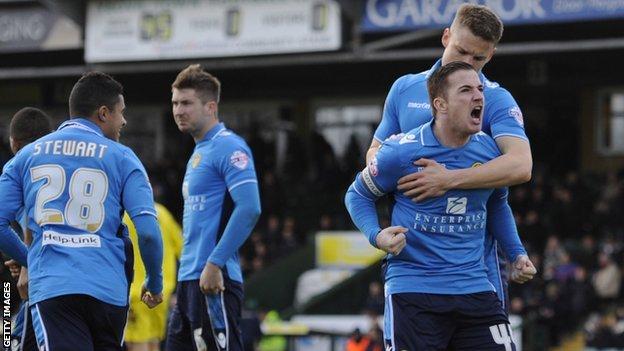 Leeds United recovered from a goal down to beat hosts Yeovil and secure only their second win in 10 games.

Ishmael Miller headed Yeovil, who are bottom of the Championship, in front, but failed to extend his side's advantage when he missed a penalty.

And the visiting side's winner came when Stephen Warnock's 40-yard free-kick was caught by the wind and flew over goalkeeper Marek Stech.

Yeovil have the worst home record in the Championship this season, having taken only eight points from their 13 home games

The defeat was Yeovil's seventh in their past eight Championship games, while the visitors will be setting their sights on the play-off positions.

Manager Brian McDermott was back in the Leeds dugout after missing the 5-1 win over Huddersfield amid confusion over his position, with the Elland Road club in the midst of a proposed takeover.

But the visitors went behind when Miller scored his third goal in as many league games, heading home at the near post following a corner.

The home side were playing with a strong wind behind them and almost went further ahead when a clearance by goalkeeper Paddy Kenny was charged down by Joel Grant before drifting over.

Leeds rarely threatened until McCormack found himself with a clear sight of goal only to send an attempted chip straight at Stech.

And it almost got worse for the visitors but, after Sam Byram fouled Kevin Dawson, Miller skied his spot-kick.

The miss was punished almost immediately after the break as Leeds took control of the match.

Stech, now kicking with the wind against him, struggled to get any distance on his clearance and the ball fell for McCormack, who curled in a delightful strike.

The wind also played a part in the second Leeds goal as Warnock's long-range free-kick was misjudged by Stech and flew in.

Jimmy Kebe shot over when clean through and McCormack had a shot saved as Leeds went close to adding to their lead in a dominant second half.

"We've got to move onto the next game and not try to drag them down too far.

"The first half was really in our favour and we really should have gone in 2-0 up. In the second half it was in their favour and unfortunately we made the mistakes they didn't into the wind.

"Marek Stech has been a great goalkeeper over the weeks and years but for him I'd put them down as two mistakes. We had only just said in the dressing room not to let that missed penalty affect us."

"What we want to avoid now is drama off the pitch. On the pitch we want drama but if we can avoid that for the last 17 games I'll be very happy.

"From what I can gather [prospective owner Massimo Cellino] is coming to the game against Brighton. Hopefully we will sit down and have a conversation and maybe a meal together and see where we go from there.

"I've had one meeting with [Cellino] when we sat down and talked but he knows what an important club Leeds United is and what it is all about."