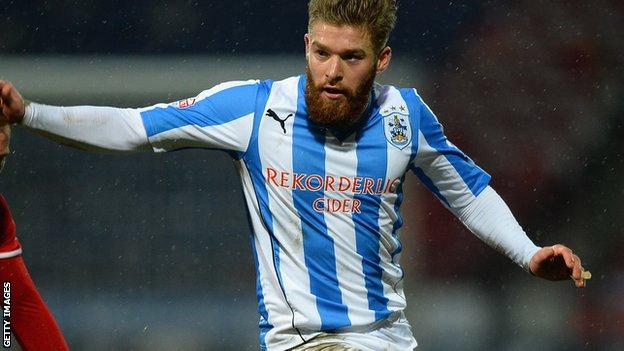 Clayton fired in his fourth goal of the season, beating away goalkeeper Ali Al-Habsi at his near post with a 20-yard strike five minutes from time.

Wigan had looked set to register a sixth clean sheet in eight league games until the former Leeds player struck.

Huddersfield's Oliver Norwood had hit the bar with a 40-yard free-kick four minutes before Clayton's winner.

The home side, boosted by the return of striker James Vaughan from a knee injury, dominated the early exchanges.

Wigan, who have now failed to score in their past three away games, grew into the match, with loan signing Martyn Waghorn providing their brighter moments.

But he was first involved in a bizarre incident on 14 minutes when, affected by the wind, he kicked the flag instead of the ball at a corner.

Referee Mark Brown insisted the corner be taken again, much to the disgust of Norwood, who was lucky not to be booked for dissent.

Marc Antoine-Fortune hit the top of the bar with a shot from Waghorn's pass after 52 minutes before Waghorn himself twice went close.

The on-loan Leicester player first hit the side-netting from close range when Fortune put him in, then blazed over from McArthur's cross.

At the other end, substitute Danny Ward grazed the side-netting with a near-post shot from Norwood's diagonal through-ball.

But Ward's introduction turned the tide in Town's favour and they began to dominate, with Clayton and Norwood coming in their own in the closing stages.

"I am delighted with the win because the conditions were so tough.

"At times it looked like no one had played the game before but I thought what quality there was on show came from us.

"The game was just strange and surreal and the conditions dictated it."

"I am as happy as I can be having lost the game. Huddersfield caused us big problems but we coped very well in difficult circumstances.

"We had more chances and more possession and we restricted them to shots from long distances.

"I felt the wrong team won. If we play like that we will win more than we lose."