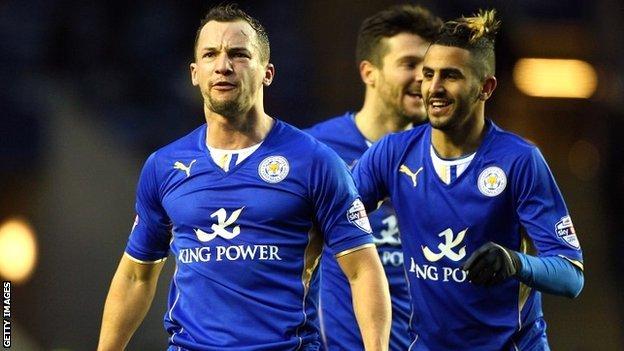 Danny Drinkwater scored a spectacular injury-time equaliser as Championship leaders Leicester battled back from 2-0 down to draw with Watford.

And, despite Matty James's volley two minutes before half-time, it looked as though City were on their way to a first league defeat since 7 December.

But Drinkwater struck a 20-yard volley in the fourth minute of stoppage time.

Lighting up the East Midlands

With Burnley moving into second place, Nigel Pearson's side are still 11 points clear at the top, despite their run of nine successive league wins ending.

The Hornets, who are 14th, set up to nullify Leicester's attacking threat, using three centre-backs and packing the midfield with five players.

And, with the Foxes struggling to come to terms with the system, the visitors could have gone in front in the fourth minute as Murray swung over a free-kick and Marco Faraoni headed wide at the far post.

But they took just five more minutes to break the deadlock as Forestieri dived forward to head home as striker Troy Deeney's shot looked to be heading wide.

Watford continued to look the better side in the tricky conditions and, although Manuel Almunia pulled off a great save to keep out James's wind-blown corner, the visitors went further ahead.

Kasper Schmeichel had saved a previous volley from Gabriele Angella, but he could do nothing about Murray's 25-yard strike.

The hosts appeared stunned, but they showed their resilience to snatch a goal back as Ritchie De Laet broke down the right and James met his low cross on the volley for his first goal of the season.

Pearson's side went flat out for an equaliser in the second half, with David Nugent heading wide from Lloyd Dyer's cross.

But their efforts looked to be in vain as the game went into stoppage time, only for Drinkwater to net a dramatic late equaliser.

"We certainly deserved to get something out of the game. It is always difficult when you go two goals down and we were disappointed in the manner in which we conceded them.

"But you have got to give Watford credit. I thought their game plan was thorough and they didn't allow us too much space behind their defenders.

"All in all, I don't think anyone could argue that we didn't deserve to get something out of the game because we dominated the vast majority of it."

"I think it was a very, very good performance against a team who have been on such a great run with nine wins.

"We created a lot of problems for them but we did not change our tactics for this match. We always play this system.

"It was a fair result and I think Leicester deserve to be top of the table because of their consistency this season."