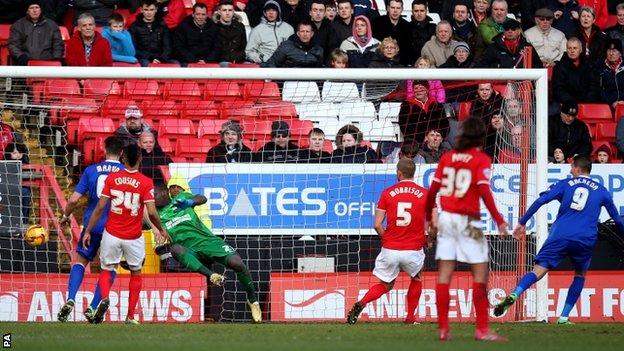 Macheda scored in each half, making it three goals in two games for Blues since he signed on loan at the end of January.

The Italian scored a close-range header before a calm second-half finish.

Charlton are without a league win since Boxing Day and are third from bottom.

Macheda, who came up through the youth ranks at Old Trafford, is in his sixth loan spell since 2011 after breaking into Manchester United's first team in 2009.

Prior to his arrival, the Blues had just one win from six Championship matches but four points from their last two matches has moved them away from relegation danger.

Charlton though are without a win in six Championship matches and are now two points adrift of safety.

Macheda headed Manchester City loanee Emyr Huws's free-kick into the net for the opener midway through the first half.

And the points were sealed when Tom Adeyemi caught the hosts on the break and Macheda was on hand to take a touch and calmly finish.

"We acquitted ourselves well with some good passages of play. We had good chances but their keeper did well.

"In the end it was not our day, we had opportunities to score. The chances were there but Birmingham scored at crucial times."

"We had to involve them (the new players) in everything we do. They have to get used to us and the way it is in the Championship if they want to add their qualities to the squad and get into the swing of things.

"We need results and we are not getting them I understand the need to push away from the bottom."

"I lost five players on loan on New Year's Day and had to rebuild the squad.

"It took a while and we lost three league games which knocked the stuffing out of us.

"Luckily I was able to recruit new players and they have done very well for us.

"Federico showed a touch of quality to finish."