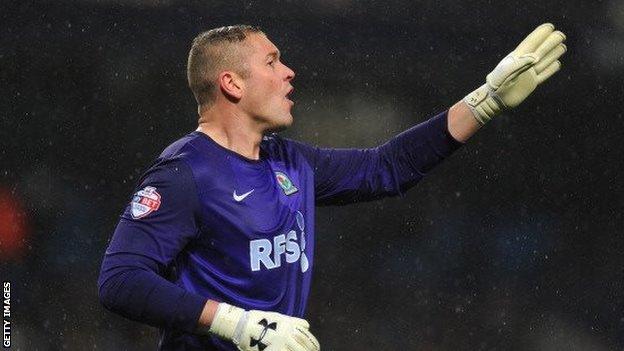 Middlesbrough played out a third consecutive goalless draw as they were held at home by Blackburn Rovers.

Mustapha Carayol, Nathaniel Chalobah and Danny Graham were all stopped by Robinson, before Albert Adomah was denied a late winner.

Middlesbrough have lost only once in their last 10 league games but progress towards the play-off spots has slowed through lack of goals, with manager Aitor Karanka's side now 12th in the Championship.

A win for Blackburn would have moved them up to seventh but boss Gary Bowyer is likely to be satisfied with a point after seeing his side struggle to create against an organised Boro defence.

The home side dominated the first half, creating chances for the impressive Carayol, who had an effort hooked away by Tommy Spurr before combining brilliantly with George Friend to give Robinson a scare.

Blackburn's former England goalkeeper was the star performer in the second half, making key saves to deny Danny Graham a goal on what was a second home debut for the boyhood club he rejoined in a deadline day loan deal with Sunderland.

And Robinson was there again at the end to twice deny Adomah the goal Boro so craved and earn a draw for the visitors.

"It's frustrating for me because we didn't play well against Doncaster, and we didn't deserve to win the game against Wigan but [against Blackburn] we had a lot of chances.

"We didn't score but that's football and I'm more confident than I was after the last game.

"The keeper did very, very well and stopped us so we have to improve with our chances."

"Robbo was outstanding. He was excellent, he just oozed international class. He's always got that in his locker. You don't play for your country as often as he did without having some outstanding ability.

"When called upon he did his job magnificently well but then again he's got another 10 in front of him that helped keep a clean sheet.

"The character and resilience that they showed can only be applauded."