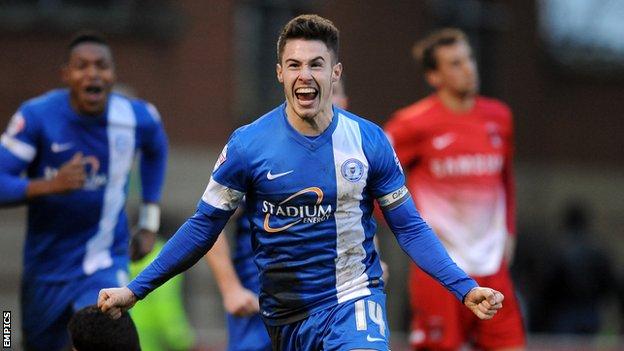 Peterborough struck twice in the final two minutes to snatch a dramatic victory against fellow promotion chasers Leyton Orient in League One.

David Mooney headed in his 17th goal of the season as the Os looked set to go top of the table on goal difference.

But Britt Assombalonga headed in the equaliser from six yards out, before Tommy Rowe sent in a fine effort from 20 yards out to win it.

Victory moves Posh into the play-off places after Walsall lost to MK Dons.

"This game can be very hurtful at times, and with a few minutes to go we should be able to see games out.

"It's disappointing and something we need to address. We gave a free-kick away for the first one, and for the second one we've given the ball away in the middle of the park when we had decent possession. Really, those goals were avoidable.

"Make no mistake, they are a good side and were in the Championship last season. If they had lost the game today, it would have been unfair on them."

"I thought we played very well. Our shape looked good and I thought we looked quite solid against a really good team that are going really well.

"We lost a poor goal but to come back the way we did with a good header by Britt [Assombalonga] and Tommy's won it for us - I thought we thoroughly deserved it.

"We've had a lot of hard luck stories but you can't keep saying that we were unlucky. We've come back and we've not done that in a while against a team that's flying high."