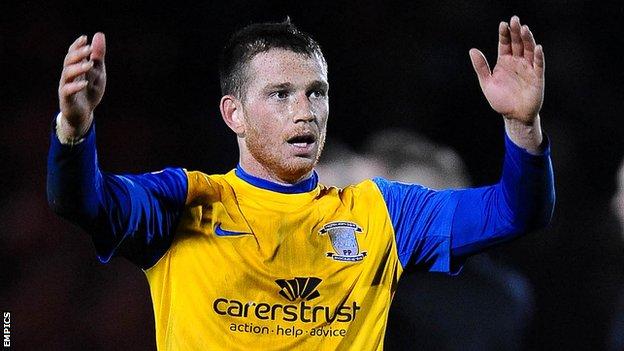 Garner nodded in a cross from Craig Davies to put North End in front and he saw another headed effort kept out by Tranmere goalkeeper Owain Fon Williams.

Substitute Jason Koumas burst through three tackles to force a good save from Declan Rudd before Rovers levelled when Ash Taylor finished from close range.

Koumas hit the bar with a free-kick before Garner's winner, the striker rounding off a swift counter attack.

Preston remained fourth, but closed the gap on all three teams above them in the table, while Tranmere's defeat left them just two points above the relegation zone.

"A point would have been nice. They've come and attacked, took chances and caused us one or two problems, but we hung in there and stayed in the game.

"You look at the goals they've scored - it's 'self-destruct' for the goals. We huffed and puffed and I can't fault the effort."

"We came here in a confident manner. The display merited a victory. All that was missing were a couple more goals before half-time.

"We were certainly the dominant team for the first 35 minutes and we gave them a bit of encouragement just before half-time, but we got back on it again and I thought we played very well today."