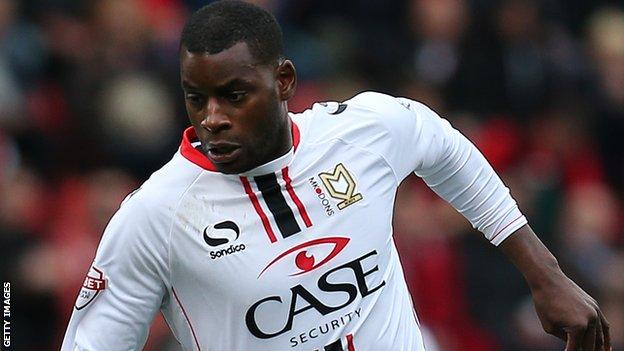 Striker Izale McLeod scored a goal in each half as MK Dons ended Walsall's seven-game unbeaten run with an impressive win at the Bescot Stadium.

The home defence struggled in the blustery wind and McLeod clipped over keeper Richard O'Donnell for the first.

Andy Butler was then sent off for bringing McLeod down in the box and Ben Reeves doubled the lead from the spot.

McLeod fired his seventh of the season before sub Michael Ngoo missed a spot-kick for Walsall after he was fouled.

The 6ft 6ins striker, making his debut following his recent arrival on loan from Liverpool, shot tamely at David Martin in the 89th minute to cap a below-par showing from the Saddlers, who had the wind in their favour after the break, but were unable to trouble the Dons defence.

Walsall dropped one place to seventh as a result of the defeat, with the visitors - who had lost their three previous games - climbing two places to ninth, seven points outside the play-off places.

"I thought the players deserved tremendous credit today because they took an awful lot of criticism, and they've come here today, they've worked on a certain system.

"It was a good performance. Before the game I was in quite a positive mood; the lads have worked hard all week.

"(McLeod's) second goal was a wonder goal, but he scored two and won a penalty, so I think the man of match decision is quite easy. "