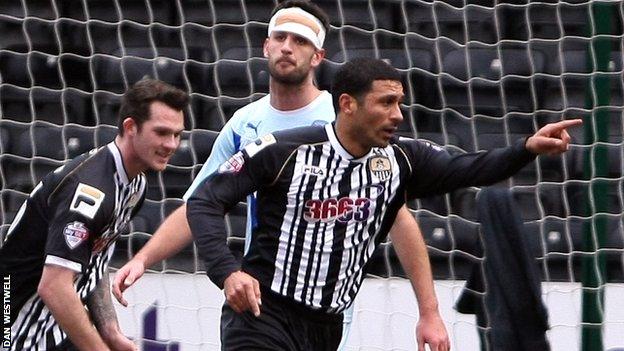 Notts County moved out of the League One relegation zone thanks to a comfortable home win over Coventry.

The Magpies took the lead on 13 minutes when Hayden Mullins emphatically met a Jamal Campbell-Ryce centre.

And County skipper Alan Sheehan wrapped up the win from the penalty spot after Campbell-Ryce was brought down in the area three minutes from time.

The home side moved up to 19th in the table and one point clear of the drop zone, while Coventry's defeat left them 11 points off the play-off places.

"It's not often that I say this about my own team, but they looked hungrier than us today. The intensity of our work, especially in the first half, wasn't good enough.

"The other aspect of it was that we lacked a focal point, we couldn't get any level of momentum. Overall, it was a disappointing performance from us.

"I was brought here to try and change a culture and bring a winning mentality to the club, and I think we have progressed in that manner. But we can't be a team which does it once every two matches, it's got to be every single week, and the players are aware of that.

"It will fester with me all week, and that's the truth."