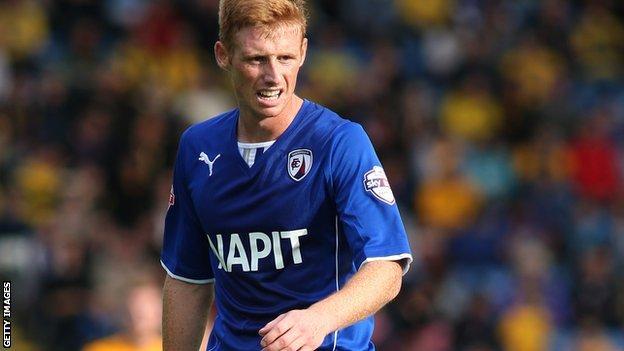 Eoin Doyle levelled from the spot before the interval after veteran full-back Ritchie Humphreys was brought down in the area by Terry Hawkridge.

Both teams pushed for a winner but it finished level.

The Spireites did have the ball in the net in the second half but Doyle's rebound was ruled out for offside.

Scunthorpe, who are unbeaten since Russ Wilcox replaced Brian Laws 14 matches ago, have now drawn their last five games and sit third.

"We've been on a good run and it would have been nice to win again, but unfortunately we haven't.

"I think you must respect the opposition as well - Scunthorpe are a very good side, they've got good players throughout the team and they pose threats up front.

"I think we showed what we're about - resolute and strong. We were maybe not as creative as we'd like to be but I thought the front two today caused Chesterfield problems.

"We got down the side of them of them fairly well, used that pace and the game could have gone either way at the end.

"I've not looked at the bigger picture today, I'm looking at us playing Chesterfield who are a terrific side and we matched them."