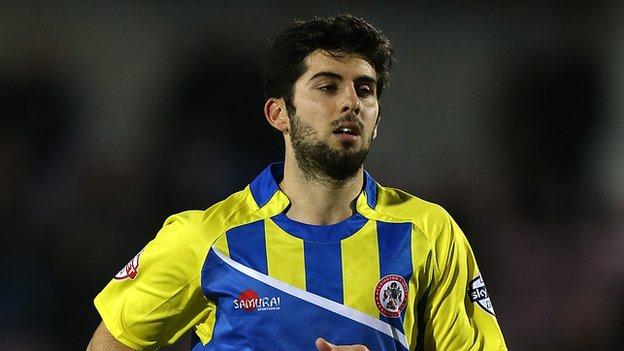 Accrington midfielder Piero Mingoia was denied a late winner by the offside flag as Wycombe claimed a vital draw in their battle for League Two survival.

Wycombe moved a single point clear of the relegation zone after Torquay's clash with Bury was postponed.

And they were thankful to see the linesman's flag with six minutes to go when Mingoia fired in a late effort.

In a game of few chances, Stanley's Peter Murphy and Lee Molyneux sent shots off target.

"I've got to take positives, like I always do. The clean sheet - we haven't had that for a while. I thought that Dean Morgan did well, as it was his first 90 minutes for six weeks and it's great to see him back.

"There's a few things to work on now - our set plays and that clinical business around the edge of the opposition box.

"It's close, and there are plenty of points to play for yet, and I'm looking forward to Tuesday against Fleetwood."

"Towards the end, there was only really one team that was going to score and I felt that was us.

"They had a couple of opportunities that were gifted to them.

"I'm dying to see the replay [of the disallowed goal] but it's a clean sheet and a well-earned point. It wasn't a classic but we did the nasty things well, stuck in there and got a point."

Shots on Target
Home1
Away0