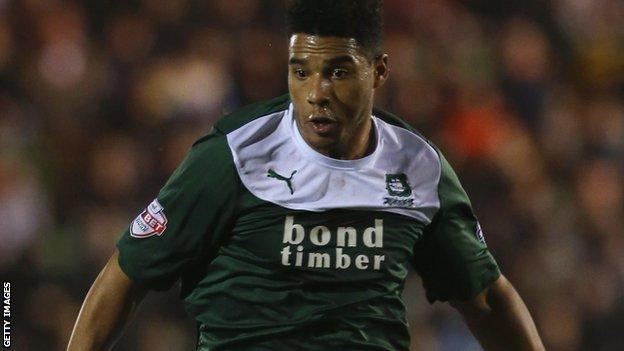 Reuben Reid's 14th goal of the season helped Plymouth end a run of four games without a win as they beat Northampton, who remain bottom of League Two.

Argyle opened the scoring when Reid pounced on a loose ball in the penalty area to fire past goalkeeper Matt Duke.

The lead was doubled when Lewis Alessandra saw his wind-assisted cross from a tight angle end up in the net.

The hosts' best chance came direct from a Chris Hackett corner that caught the wind but Jake Cole made a superb save.

The win is Plymouth's first success at Sixfields and lifts them to 10th in the table, while Northampton remain six points adrift at the foot of the table.

Argyle, with a strong wind at their backs in the first half, started strongly and after Jason Banton's effort had been blocked, Reid fired home to open the scoring.

Banton and Neil Trotman had chances to increase the lead before Alessandra celebrated his 25th birthday by doubling Plymouth's advantage.

The Cobblers, playing at home for the first time under new boss Chris Wilder, went close through Alan Connell but were unable to find a route back into the match.

"The last two weeks have been ridiculous conditions but we've got to do better defensively. The goals that we've conceded are really poor.

"There were good performances from Alan Connell and Brennan Dickenson, and there were some decent aspects of the game, but we gave ourselves a mountain to climb.

"There might be one or two of the lads who aren't involved going out, but there won't many changes now. We have to work ridiculously hard in this next period to bed down."