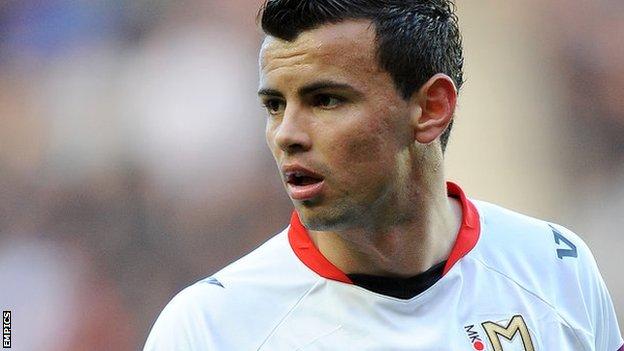 Zeli Ismail scored the only goal of the game as Burton beat Morecambe to climb to within five points of leaders Chesterfield in League Two.

In difficult conditions, the Brewers had the better chances but Adam McGurk fired over and Gary Alexander and Alex MacDonald saw efforts saved.

Winger Ismail's decisive effort flew into the bottom corner from outside the box, giving Barry Roche no chance.

Morecambe's Jack Redshaw had seen an early effort ruled out for offside.

The Shrimps are still without a win since Boxing Day, while Burton ended a run of three games without a victory.

"I don't think we did enough to win the game. They shaded the individual battles and played the conditions better.

"It says it all that we've come off and our goalkeeper has been named man of the match.

"We've had one or two opportunities but overall we haven't done enough to win the game and they've shaded it in all areas."

"The pitch made the conditions very difficult for both teams. I have to say the groundsman did amazing to get the game on in the first place.

"I thought we played with amazing control and there was a real togetherness about our performance.

"We've worked really hard this week to not let this good situation we're in slip away. We haven't won enough games in the last four or five so to play that way and with so much control, I was really pleased with that."