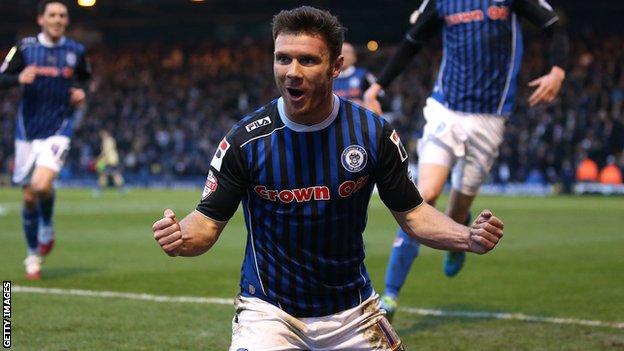 He rounded Worner for number two and the 21-year-old's lobbed finish took his goal tally for the season to 15.

Charlie Wyke wasted the Dons' best chance, running into team-mate Danny Hylton with the goal at his mercy.

"I apologise for the performance. I felt sick watching it as the game wore on.

"I felt very let down by the lack of tempo when we went 1-0 down, and the lack of desire from the team to get back in the game. It was a severe lack of character throughout the team.

"Losing some players early on had a massive impact, as everything we worked on during the week went out the window, but it's not an excuse I'm going to hide behind."

"I knew we could grow into the game once we took the sting out of the opposition.

"We didn't allow them really to get any momentum and I knew we could go on and win the game.

"I thought we were excellent in our pursuit of making sure that we didn't give the opportunity to the opposition. I thought we defended absolutely superbly.

"We're happy with the success we've already achieved over the last 12 months. If we can continue that success then I'm sure we'll at least be in a play-off place.